When St. Porphyrios Visited the Shrine of St. Nicholas of Vounenis in Evia 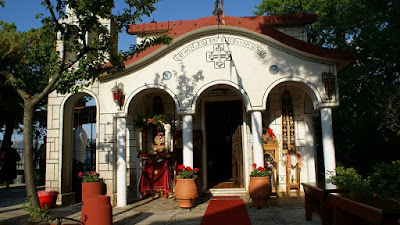 This newly-shining luminary of our Church, a few years prior to his venerable repose, wanted to go venerate at the private Chapel of Saint Nicholas the New of Vounenis, in Koutourla of Dirfyon on the island of Evia. His health was not good and his vision was reduced to its minimum.
It was a Saturday in late May, a time when nature blossoms with vegetation and the air is filled with scents of every kind of flower. The Elder had never been to this shrine. He knew, however, with the eyes of his soul the way through the forests, mountains, rivers and ravines, receiving information from the heavenly satellite of Grace. Those who escorted him lay him down on a wooden board in the passenger seat, and after two hours with his directions they arrived at their destination. This caused an impression on all his escorts, although they knew of his spiritual gifts, for he even told them where to turn along the dirt roads of the area.
Before the Church of Saint Nicholas the driver continued along the main road. Suddenly he heard the Elder say to him:
"Blessed one, you passed the turn! You should have turned left."
He reversed a bit and they soon came to the estate where the chapel was built. They stopped in front of the main entrance and notified the owners of the arrival of Elder Porphyrios. Can you imagine the surprise and joy of the owners of the church, for the presence of the wonderworking Elder! The alarm was sounded. The whole family rushed to get his blessing. A chair was brought for him to sit under some blooming trees, and they asked him if he wanted to venerate in the church, located at the other end of the estate, and because of the dense vegetation there there was no line of sight from where the Elder sat. He replied that his health did not allow him to move on foot to venerate the Saint. However, he described the interior of the church and its surroundings in detail, as if he was its founder. Then he said:
"Bring to me the little fragments of the sacred relics of the Saint," which he saw with the eyes of his soul that were located on the Holy Altar.
When he venerated them with reverence and asked what he wanted for a treat, he replied:
"I only want water and some cherries, from the cherry tree behind the Sanctuary!"
Even this the Elder saw, amazing all with his clairvoyance.
Today, at the spot where Saint Porphyrios sat, a beautiful stone shrine has been built, to remind future generations of his pilgrimage there, to the Venerable Martyr Saint Nicholas the New.
Source: Translated by John Sanidopoulos.
John at 4:38:00 PM
Share
‹
›
Home
View web version