Synaxarion for Joseph the Betrothed, James the Brother of God and David the Prophet 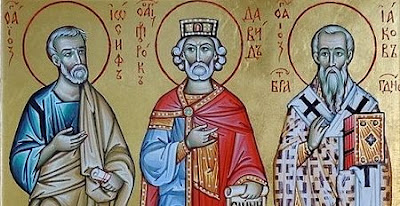 On the Sunday after the Birth of Christ, we commemorate the Holy and Righteous Joseph the Betrothed, James the Brother of God, and David the Prophet and King.
Verses
To Joseph.
I honor Joseph the betrothed of the Virgin,
As her sole elected guardian.
To James.
You were not only a carpenter's child, but the brother of the Lord,
Who built all things by His word, blessed one.
To David.
Who will I declare, as a witness before the Lord,
David being found of His own heart? 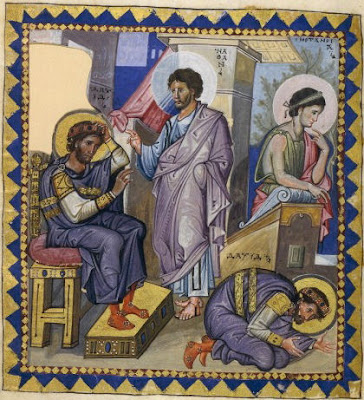 David the Prophet and King was the son of Jesse. He was taught the Law of the Lord by the Prophet Nathan from Gibeah, who prophesied for forty years, which was 999 years before the advent of Christ. Nathan foreknew that David wanted to transgress the Law of the Lord, and commit adultery with Bathsheba. As he made haste to go and tell him of his future sin, he was hindered in this by the envious devil in the following manner. By the road he found a dead man who had been murdered lying naked, and he remained there to bury him. During that time, David committed the sin. Knowing this, Nathan returned to his home weeping and in sorrow. When David killed Uriah, the husband of Bathsheba, the Lord sent the Prophet Nathan to him in order to rebuke him. David repented and wept much for these two sins, and after he grew very old he died and was buried with his fathers.
Regarding Joseph the Betrothed and his son James the Brother of God, everyone knows, as we learn of them in the divine Scriptures. Their Synaxis takes place in the Great Church, and in the apostolic Temple of the Holy Apostle James the Brother of God, within the revered home of the Most Holy Theotokos in Chalkoprateia. 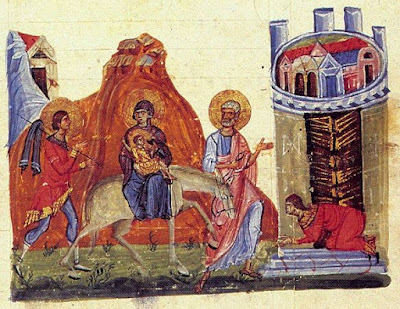 Apolytikion in the Second Tone
Proclaim the wonder, O Joseph, to David, the ancestor of God: you saw a Virgin great with Child, you gave glory with the shepherds, you venerated with the Magi, you received the news from the angel. Pray to Christ God to save our souls.
Kontakion in the Third Tone
Today godly David is filled with joy; Joseph and James offer praise. The glorious crown of their kinship with Christ fills them with great joy. They sing praises to the One ineffably born on earth, and they cry out: O Compassionate One, save those who honor You.