Saint Themistocles the Martyr as a Model for our Lives 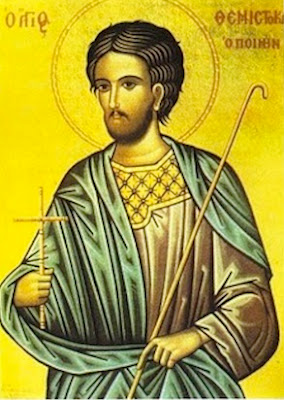 By Protopresbyter Fr. George Papavarnavas
In the long list of the billions of Martyrs of the Orthodox Church there are many names that are totally unknown to us, as well as some lesser known ones since we have the bare minimum about them. There are also Saints who have made a big name for themselves, but we rarely hear about them, even though many people bear their names. This is due to constant repetition because usually our children are given the names of our parents, and they mainly prefer the names of those Saints who have the gift to work miracles.
Our name is bound with our existence. We carry it with us everywhere and always, and by it we are recognized and acknowledged. Saint Mary Magdalene recognized Christ, after His resurrection, when He called her by name. Earlier she thought he was a gardener.
Also, our name is related to our feast day, because we Orthodox Christians, unlike Christians in the West of the Papal and Protestant persuasions, do not celebrate our birthdays, but the day on which our patron saint celebrates whose name we bear. By doing this we honor our Saint, and we have them in our life as a model, friend and protector. For the day of our birth is not an occasion for joy and festivities, since it was on this day we put on these "garments of skin" of corruption and mortality. Rather, for us the day of our birth is the day of our baptism, when we emerged from the font, which is the womb of the Church, and we were born "of water and the Spirit."
I would like to take this opportunity to mention that our name is not associated with the Mystery of Baptism, but it is given to a newborn child on the eighth day after their birth, and there is a specific prayer for this in the Euchologion of our Church.
The name Themistocles we originally encounter in both Greek antiquity and in the list of the saints of our Church. Holy Martyr Themistocles was from Myra in Lycia and lived during the time of the Great Persecution against the Church in the third century. He was a shepherd by trade, little educated, but he was "wise according to God." To many Christians he was a source of solace and refuge in their difficult times, and in times of persecution they fled to him in order that he may hide them in the steep hillsides. When this news was heard by those in power, he was arrested. Refusing to betray the people he took care of, he was submitted to horrible torture. After planting nails onto the ground, they dragged him over, and in this manner his life ended.
The Holy Martyrs were the greatest resistors in the history of mankind. They resisted the godless and unjust orders of the unfree and tyrannical regimes of their times, choosing the slogan: "We must obey God rather than men" (Acts 5:29). They preferred to hold human rules in contempt rather than overstep the divine commandments. In other words, when human laws were in opposition to the Law of God, then without the slightest hesitation they chose obedience to the latter. Of course, this had terrible consequences, since they underwent horrible tortures and finally were killed. Nevertheless they resisted, because for them life was Christ and not mere biological existence. They considered true death to be the denial of Christ, and did not flinch at all before physical death, since in their inner lives they conquered death and exceeded it in the limits of their personal lives. They truly loved life, authentic life, which is why they stubbornly resisted "the unlawful dictates of impious tyrants." As the sacred hymnographer writes: "The chorus of martyrs resisted tyrants, saying: We are soldiers of the Ruler of the powers on high; though you give us up to fire and torment, we shall not deny the power of the Trinity."
In the Epistle to Diognetus, which is a magnificent text from the second century, the following is mentioned among other things about the early Christians: "As citizens, they share in all things with others, and yet endure all things as if foreigners. Every foreign land is to them as their native country, and every land of their birth as a land of strangers... They obey the prescribed laws, and at the same time surpass the laws by their lives." In other words, when human laws were in conflict with the Law of God, they became anarchists. But their anarchy was a perfectly healthy state, since there was no antipathy or hatred for authority as well as those in authority. Let us not forget that the Holy Martyrs, while they were tortured and suffered, did not cease to love and pray for their executioners.
Thus the two names that we bear, namely our personal names and our Orthodox Christian names, give us great responsibility: to preserve our faith pure and to live it. By insisting on Orthodox tradition and living the commandments of Christ we are directly linking our life with its most authentic expression. Resistance without fanaticism and hatred to prevent our change from this reveals spiritual health and well-being.
Source: Ekklesiastiki Paremvasi, "Ἅγιος Μάρτυς Θεμιστοκλῆς", December 2000. Translated by John Sanidopoulos.
John at 12:04:00 PM
Share
‹
›
Home
View web version