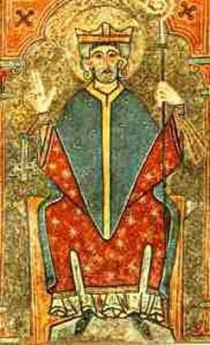 Sulpicius Severus (+ 425) was a Christian writer and native of Aquitania in modern-day France. He was a friend and admirer of Saint Paulinus of Nola and spiritual child and biographer of Saint Martin of Tours. In his Life of Martin, Severus describes his first meeting with him, and he reports:
"[Martin's] talk with us was about not other than the abandonment of the enticements of the world and the burdens of the age so that we might follow the Lord Jesus freely and readily. And he offered to us the most outstanding example of our time, that illustrious man Paulinus, whom we mentioned earlier. He, having thrown away his great wealth and followed Christ, almost alone in these times had fulfilled the evangelical teaching. 'We must follow and imitate him!' he exclaimed. The present age was fortune in an example of such great faith and virtue, since, according to the will of God, as a rich man and possessing many things, by selling all and giving to the poor, he had made possible by example what was impossible to accomplish."