Second Homily for the Sunday of the Samaritan Woman (St. Luke of Simferopol) 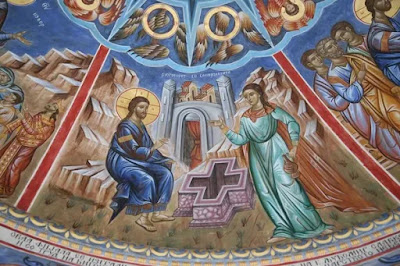 (Delivered in 1958)
In the book of the Prophet Isaiah we read words of great importance inspired by the Holy Spirit: “I revealed myself to those who did not ask about me; those who did not seek Me found me” (Isaiah 65:1).

The conversation of our Lord Jesus Christ with the Samaritan woman, set forth in the fourth chapter of the Gospel of John, serves as the most striking confirmation of the truth of these Divine words.

The Lord Jesus Christ rested at the well of Jacob, near the Samaritan city of Shechem, on the long journey from Jerusalem to Galilee. A Samaritan woman came to the well with a water carrier to draw water. The Lord asked her to give Him a drink.

The Samaritan woman was surprised at this request, because she saw the one who asked for water as being one of the Jewish people, who had no communication with the Samaritans, and asked: “How are you, being a Jew, asking from me a drink, a Samaritan woman?” (John 4:9). The answer of the Lord Jesus struck her: “If you knew the gift of God, and who it was that says to you: 'Give Me a drink,' then you yourself would ask Him, and He would give you living water” (John 4:10).

Christ spoke, of course, about the water of immortality, about which is chanted in the kontakion of the feast of Mid-Pentecost. But the Samaritan woman could not know this and thought only of a fresh spring water, which has the wonderful property of quenching thirst forever.

Her amazement reaches its climax when the Lord Jesus reveals His Divine omniscience, saying that she had five husbands, and the one she now has is not her husband. Her spiritual eyes open wide, and she sees in her interlocutor not an ordinary person, but a prophet. It is necessary to talk with such a great man about the highest questions of religion, and she asks Him to tell her who is right: whether the Jews worshiping God in the Temple of Jerusalem, or they, the Samaritans, worshiping Him on Mount Gerizim.

The Lord Jesus Christ answered her with extraordinary words about worshiping God in Spirit and in truth, and ended His profound conversation with the Samaritan woman by directly calling Himself the Messiah, the Christ.

Both at the beginning and in the middle of her conversation with the Lord Jesus Christ, the Samaritan woman, of course, did not look for the Messiah, Christ, in her interlocutor - and He Himself revealed Himself to her, who did not ask about Him as the Messiah.

Excited by her conversation with the Lord Jesus Christ, the Samaritan woman left her water carrier and hurriedly went to Shechem to tell its inhabitants about the unusual passer-by from Judea, who knew all the affairs of her life and called Himself the Messiah - Christ. She invited her fellow citizens to go and see for themselves if he was the Christ. At this time, the apostles of Christ returned from Shechem, whom the Lord Jesus sent to the city to buy food. The Samaritans, who came at the call of the woman, found only the end of the conversation of the Lord Jesus with His disciples about food unknown to them, which is to do the will of the Heavenly Father; about the harvest, which seems to them immature, but has long since ripened; the one who sows and the one who reaps will receive the same reward.

It would seem that this extraordinary speech was beyond the understanding of the Samaritans, but hearing it and a very brief personal communication with Jesus Christ were sufficient for them to believe in the Lord Jesus as the Messiah - Christ, not only according to the words of the Samaritan woman who called them, but by believing their own eyes and ears.

They humbly asked the Lord Jesus to come into their city. He stayed in Shechem for two days, and more Samaritans believed in Him. The Samaritans did not hear the Divine preaching of Jesus Christ in Judea, did not know His Divine commandments of beatitude, did not see His countless miracles. They did not seek Him, did not ask about Him, and yet His conversations with the Samaritan woman, declaring Himself the Messiah - Christ and two days of fellowship with Him in Shechem were enough for the words of the Prophet Isaiah to be so vividly fulfilled on them: “I revealed myself to those who did not ask about me; those who did not seek Me found me."

Of all the books of the Old Testament, the Samaritans accepted only five books of Moses; they did not read the Prophets, who clearly foreshadow the incarnation of the Son of God and the salvation of the human race by Him. The Jews read and knew all this, heard the three-year sermon of the Lord Jesus and were witnesses of His unheard-of miracles - and yet the majority of them did not believe in Him.

In the lives of the saints, especially the martyrs of Christ, there are very many examples of how pagans who were present at the terrible torment of Christians, and even the perpetrators of torture and execution over them, suddenly turned to faith in the Lord Jesus Christ.

The superhuman courage, fortitude, and fearlessness of the holy martyrs made such an irresistible impression on the pagans that they threw away the instruments of torture, declared themselves Christians, and became martyrs themselves.

I think that from everything I have said today about sudden conversions to the Christian faith, some may ask the question: if God Himself is not seeking them and reveals Himself to those who did not ask about Him, then what are those unbelievers whom He did not call to faith guilty of? For what I said about the easy and quick conversion of the Samaritans, about God's help to the holy martyrs, the amazing impression of the spectators of their torment are only exceptional facts; and as a general rule, our conversion with all our heart to the Lord Jesus Christ does not happen suddenly.

Burning faith in Him is born and grows continuously in the hearts of people, when struck by the Divine, superhuman depth of His teaching, by possible miracles from God, and most of all by the deepest spiritual shock that we experience, looking at our Savior, nailed to the terrible cross on Golgotha.

The Holy Gospel brings to Christ all those who read it with childlike purity of heart.

Therefore, they are unanswerable whose hearts are impure, filled with addiction to earthly goods, and therefore they do not even want to know the Gospel of Christ.

And that is spiritual death.

Let those who do not believe in the Lord Jesus Christ, in the Holy Trinity, remember the astonishing and touching words of our Savior: “... unless you turn and become like children, you will not enter the Kingdom of Heaven” (Matthew 18:3). Amen.