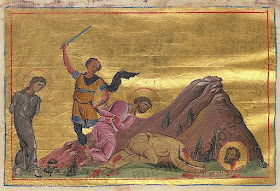 Verses
For September 17
To Maximos, Theodotos and Asklepiodota.
One woman and two young men,
Went to decapitation with one burning heart.
For February 19
To Maximos, Theodotos and Hesychios.
Three strong men contested together,
Being brave even to decapitation for you Trinity.
To Asklepiodota.
Christ crowned Asklepiodota,
She whose head was cut off by the sword.
Synaxarion for September 17
These Saints for their confession of Christ were beaten by unbelievers, and after their sides were cut open they were thrown into a dark prison. Lastly their heads were cut off and they received the crown of martyrdom. 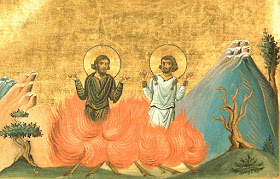 Synaxarion for February 19
The Saints above stood before the governor, and not being persuaded to deny Christ, they suffered many punishments. First they were suspended on a wooden pole, and they were torn by iron claws. Then they were forcibly moved from one city to the next. After this they were given to the wild beasts to be devoured, but divine grace kept them unharmed. Then they with Saint Asklepiodota were thrown to the ground and stretched out on wood, which was followed by them being tied up to a bull. All of them were afterwards stoned, then dragged through the woods in an impassable place, and after they were beheaded. In this way the blessed ones received the crown of the contest.*
Notes:
* The Menologion of Basil II for February 19th says Maximos and Theodotos were martyred by being cast into a furnace.
John at 11:33:00 AM
Share
‹
›
Home
View web version