Macrobius and the Slaughter of the Innocents 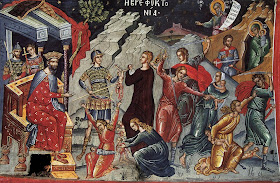 By Tobias George Smollett
Macrobius about the year 400, bears testimony to Herod's slaughter of the infants at Bethlehem. This writer informs us, that "when Augustus had heard, that among the children within two years of age, which Herod king of the Jews commanded to be slain in Syria, his own son had been killed, he said: 'It is better to be Herod's hog than his son.'" (Macrobius, Saturnalia 2.f.11)
On this noted passage Dr. Lardner made the following judicious observation in the first edition of the Credibility of the Gospel History: "I lay little or no stress upon this passage; partly, because it comes too late; partly because there is reason to suppose that Macrobius has been mistaken about the occasion of the jest. No early Christian writers have said anything of Herod's having a young child of his own killed in the slaughter at Bethlehem. If Augustus did pass this jest upon Herod, it might be occasioned by the death of Antipater, or rather of Alexander and Aristobulus."
In the second edition the doctor adds:

"It ought to be allowed, that Augustus did pass this jest on Herod upon some occasion, or other: and that Macrobius has given us the words of the jest. This passage also shews, that Herod's slaughter of the infants in Judea was a thing well known in the time of Macrobius, and was not contested by heathen people.
If we could be assured, that Macrobius transcribed this whole passage, not only the jest itself, but the occasion of it likewise, from some more ancient author; it would be a proof, that this event was known in that author's time also. And we should have a great deal of reason to suppose that author to have been a heathen, because it is likely, that Macrobius, a bigoted heathen himself, did not much deal in Christian writers.
But it is possible that Macrobius found only the jest in his author, and added the occasion, having collected it from the common discourse of the Christians in his time, who frequently spoke of this cruel action of Herod. There is some reason to suspect this, because it is very likely that Augustus's reflexion upon Herod was occasioned by the death of one of those sons, whom Josephus has mentioned: and that it has no relation at all to the slaughter of the infants at Bethlehem. This suspicion may be farther strengthened by the great agreement of Macrobius with St. Matthew, in the words which he useth concerning the children. Macrobius being ignorant of Herod's story, and having heard of the slaughter of the infants; when he met with this jest in some author, concluded, that there had been some young child of Herod put to death with them.
I am content therefore to leave it a doubtful point, whether Macrobius transcribed this whole passage, or the jest only, from some more ancient author.*
Upon the whole then, there lies no objection against this relation of St. Matthew. There is nothing improbable in the thing itself, considering the jealous, cruel temper of Herod. The silence of Josephus, or of the ancient Greek and Roman historians, can be no difficulty with any reasonable person. This fact is confirmed by the express testimonies of very early Christian writers, and by Macrobius, a heathen author about the end of the fourth century: from whom it appears, that this event was not then contested, and that it was even better known than the fate of those sons of Herod, whom Josephus says he put to death at the man's estate."

In the work now before us he farther observes:

"That this jest of Augustus stands in a chapter of Macrobius, which contains a collection of Augustus's witty sayings, or jests upon others, and the repartees, or smart sayings of others upon him, which, as it seems, to his no small honour, he bore very' patiently. As they are all independent on each other, no elucidations can be brought in from the connection: for there is none.

Pontanus, in his notes upon this place of Macrobius, says, 'Scaliger wondered, that Augustus would make this reflection upon Herod, since Augustus himself had confirmed the sentence of death upon the three sons of Herod.'

I do not find this place in Scaliger. But whoever wondered at it, it was without reason, in my opinion. For though Augustus complied with the requests, or proposals of Herod, and gave him leave to do with those sons as he pleased; the emperor might still think it a strange thing, that any prince should put so many of his own sons to death; and he might well say, alluding to the Jewish custom of forbearing to eat swine's flesh, 'It was better to be Herod's hog, than his son.' Very probably, that was the occasion of the jest of Augustus. And therefore as Whitby says, 'It must be confessed, that Macrobius is mistaken in the circumstances of this story.'"

We may add, that jests of this kind are popular stories that deserve no credit.
* Sixtus Senensis tells us that this sarcasm is mentioned by Dion Cassius in his Life of Augustus. That part of Dion's history is now supposed to be lost: but, unless we imagine that Sixtus founded "his asertion on the report of some, preceding writer, it must have been extant, when he published his Bibliotheca, in the year 1565.
Source: From "Lardner's Testimonies to the Truth of Christianity", The Critical Review, Or, Annals of Literature, Volume 23, 1767.
John at 1:06:00 PM
Share
‹
›
Home
View web version