Did Christ Perform Miracles as a Child? (St. John Chrysostom) 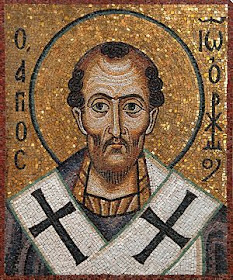 By St. John Chrysostom
(From Homily 21 on the Gospel of John)
"This beginning of miracles did Jesus in Cana of Galilee." (John 2:11)


Now if any say that this is not a sufficient proof that it was the "beginning of His miracles," because there is added simply "in Cana of Galilee," as allowing it to have been the first done there, but not altogether and absolutely the first, for He probably might have done others elsewhere, we will make answer to him of that which we have said before. And of what kind? The words of John (the Baptist): "And I knew Him not; but that He should be made manifest to Israel, therefore am I come, baptizing with water."
Now if He had wrought miracles in early age, the Israelites would not have needed another to declare Him. For He who came among men, and by His miracles was so made known, not to those only in Judea, but also to those in Syria and beyond, and who did this in three years only, or rather who did not need even these three years to manifest Himself (Matt. 4:24), for immediately and from the first His fame went abroad everywhere; He, I say, who in a short time so shone forth by the multitude of His miracles, that His name was well known to all, was much less likely, if while a child He had from an early age wrought miracles, to escape notice so long. For what was done would have seemed stranger as done by a boy, and there would have been time for twice or thrice as many, and much more.
But in fact He did nothing while He was a child, save only that one thing to which Luke has testified (Lk. 2:46), that at the age of twelve years He sat hearing the scholars, and was thought admirable for His questioning. Besides, it was in accordance with likelihood and reason that He did not begin His signs at once from an early age; for they would have deemed the thing a delusion. For if when He was of full age many suspected this, much more, if while quite young He had wrought miracles, would they have hurried Him sooner and before the proper time to the Cross, in the venom of their malice; and the very facts of the dispensation would have been discredited.
John at 3:42:00 PM
Share
‹
›
Home
View web version