Verses
You were beheaded Niketas with the sword,
Cutting off all the villany of the enemy.
On the twenty-first the head of Niketas was harshly cut off.
The Holy, Glorious, New Martyr of Christ Niketas was born in the town of Mandraki on the Aegean island of Nisyros, and his father was one of the community leaders of the town. His father committed some crime for which he was arrested, and brought for trial before the Ottoman courts, and fearing the punishment of death, he decided to become a Muslim along with his family. Thus Niketas, who was too young to realize the significance of the change, was given the name Mehmed. And because the Christian community of Nisyros looked down upon such a betrayal, the entire family moved to the island of Rhodes.
One day Niketas got into a fight with a Muslim boy with whom he kept company. The boy's mother, who found out about it, began yelling at Niketas, and knowing the story of his family, she called him a "giaiouri" which translates as "infidel". Perplexed by this insult, when Niketas got home he asked his mother what it meant, but she dismissed his question. Wanting to find out the answer, Niketas persisted in his efforts to find out the truth. His mother finally gave in and told him how they became Muslims. Saddened by this story, he wanted to know what his Orthodox Christian (Roman) name was that he received at his Baptism. When he was told it was Niketas, he became determined to return to his ancestral faith, and awaited the opportunity to escape the island.
Following his conscience, Niketas decided to board a ship for the island of Chios, landing at the harbor of Lithe. As he walked without knowing where to go, he ended up at the Monastery of Nea Moni, where he revealed his story to the Abbot, and asked for his advice regarding his salvation. The Abbot told him to visit Saint Makarios, the Metropolitan of Corinth, who lived as an ascetic on the island. When Saint Makarios heard his confession, he was received back into the Church through Holy Chrism and received spiritual guidance.
Niketas decided to stay in the Monastery of Nea Moni, where he began to live an ascetic life, but he expressed his piety in a strange and childish way, which made many of the monks question whether or not he had lost his mind. But in his heart he was motivated by his love for Jesus Christ. For greater asceticism and hardship Niketas decided to live in the Cave of the Holy Fathers near the Monastery, nearby the ascetic Anthimos to whom Niketas confessed that he desired to publicly testify for his faith in Jesus Christ, reject Islam and die a martyric death. Returning to the Monastery, he expressed to the fathers the same longing. After they discussed the issue and prayed the Supplicatory Canon to the Theotokos (Parklesis), permission was granted and he was given the blessing. Niketas at this time was only 15 years old. 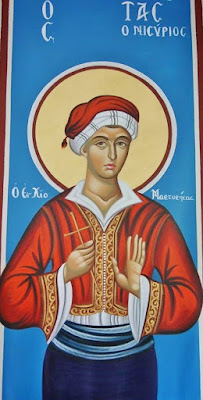 When the blessed child arrived at the port of Chora in Chios he was arrested by a Crimean Muslim tax collector, because he had no proof that he paid his haratsi, or head tax, required of all Orthodox Christians in the Ottoman Turkish state. As he was being led to prison the tax collector stopped at a place called Vounaki, where he searched for other tax violators. Just then a priest named Daniel, who knew Niketas, happened to come by and called out Niketas using his Muslim name Mehmed. When he asked Niketas why he was being held, he was told because he did not pay the capitation tax. For this reason the priest Daniel shouted: "This is something new! Must Muslims now also pay the capitation tax?" When Niketas explained to him that he was a Christian named Niketas, the Crimean Muslim overheard and came to investigate. For this Niketas was taken to the Turkish judge and interrogated.
Niketas confessed to the judge that he had been a Muslim and was circumcised, but decided to return to his ancestral faith which was the truth and be called by his baptismal name Niketas. The judge therefore ordered that Niketas be imprisoned and tortured for ten days to come to his senses and return to Islam. Niketas remained steadfast and was not frightened, although they cursed at him and beat him mercilessly. And although they would bring him food to eat, he chose not to eat, but to fast and pray, saying: "I am being fed with food which you do not have, and I rejoice with joy which you cannot experience." He was also placed in a stable, in order to be trampled upon by the wild horses, but when it was discovered that he was unharmed, he was thrown back into prison.
When the ten days were completed, and it was seen that Niketas had no desire to return to Islam, but was even more steadfast in his Orthodox Christian faith, they led Niketas to the edge of the city, to a Metochion (Dependency) of the Athonite Monastery of Iveron. For the last time he was urged by the executioners to return to the Muslim faith and escape death, but Niketas replied: "I am a Christian; my name is Niketas, and I will die as Niketas."
With this the executioners made Niketas kneel a number of times in an attempt to frighten him, but he said to them: "Why do you delay? Kill me quickly that I may rest in the good things of Paradise." The executioner then struck the blade of the sword several times against his neck lightly, to bring greater pain. After several strikes, the young Niketas was decapitated and received the crown of martyrdom on 21 June 1732 (some sources say 1792). The faithful then gathered his martyric blood, and when the blind were anointed with it they received their sight. And although the Turks threw dirt over his body to dishonor it, the body would remain clean for many days. To prevent his sacred relic from being honored by the Christians, it was thrown into the sea. His sacred skull was saved however, and today it is kept at Iveron Monastery in Mount Athos. 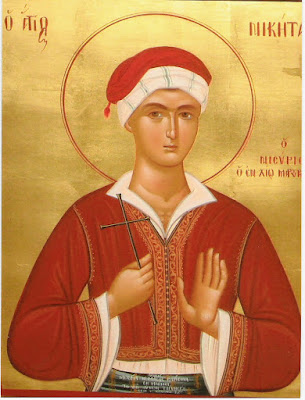 Apolytikion in the First Tone
The offspring of Nisyros and boast of Chios, the guardian of the Aegean Sea, glorious Niketas, let us the faithful together sing hymns, sincerely crying out to him. Holding litanies to celebrate your memory, save those who cry to you: Glory to Christ Who glorified you, glory to Him Who crowned you, glory to Him Who granted you to be our unsleeping intercessor.
Kontakion in the Fourth Tone
Like a newly-appeared star, O Athlete, you arose in the revered Church, shining upon the faces of the pious, who praise you with longing, and celebrate Niketas, your difficult contest, and your most-brilliant memory, crying out: Glory to Christ, Who crowned you.
Megalynarion
Rejoice, the divine shoot of Nisyros, and the divine communicant of the Athletes. Rejoice, who by your honorable blood, you sanctified the waters of Chios, glorious Niketas.
John at 11:20:00 AM
Share
‹
›
Home
View web version