The Vision of the Apostle Carpos of the Seventy 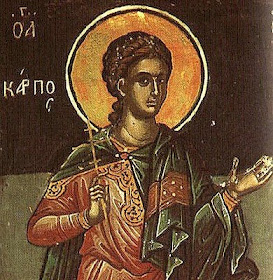 Holy Apostle Carpos (Carpus) of the Seventy (Feast Day - May 26)


By St. Nikolai Velimirovich
Carpos was one of the Seventy Apostles. He was a follower and companion of the Apostle Paul by whom he was appointed as bishop of Varna in Thrace. He also preached the Gospel in Crete where he received St. Dionysius the Areopagite in his home. St. Dionysius testifies that Carpos was a man with an exceptionally pure mind, meekness and innocence and that the Lord Jesus, with His angels, appeared to him in a vision, and that he never began the Divine Liturgy unless he did not had a heavenly vision beforehand. Enduring many assaults for the Name of Christ, he finally suffered at the hands of the unbelieving Jews and was killed and, with his soul, took up habitation in the kingdom of God to delight eternally gazing upon the Lord in glory. 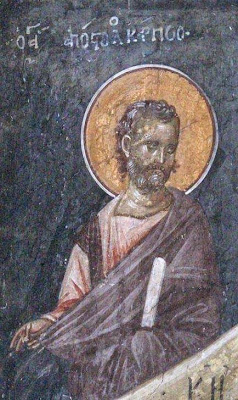 The Vision of Carpos
(Letter VIII)
By St. Dionysius the Areopagite
When I was once in Crete, the holy Carpos [2 Tim. 4:13] entertained me, a man, of all others, most fitted, on account of great purity of mind, for Divine Vision. Now, he never undertook the holy celebration of the Mysteries, unless a propitious vision were first manifested to him during his preparatory devout prayers. He said then, when some one of the unbelievers had at one time grieved him (and his grief was, that he had led astray to ungodliness a certain member of the Church, whilst the days of rejoicing were still being celebrated for him); that he ought compassionately to have prayed on behalf of both, and taking God, the Savior, as his fellow-helper, to convert the one, and to overcome the other by goodness [Rom. 11:21], and not to have ceased warning them so long as he lived until this day; and thus to lead them to the knowledge of God, so that the things disputed by them might be clearly determined, and those, who were irrationally bold, might be compelled to be wiser by a judgment according to law.
Now, as he had never before experienced this, I do not know how he then went to bed with such a surfeit of ill-will and bitterness. In this evil condition he went to sleep, for it was evening, and at midnight (for he was accustomed at that appointed hour to rise, of his own accord, for the Divine melodies) he arose, not having enjoyed, undisturbed, his slumbers, which were many and continually broken; and, when he stood collected for the Divine Converse, he was guiltily vexed and displeased, saying that it was not just that godless men, who pervert the straight ways of the Lord, should live. And, whilst saying this, he besought Almighty God, by some stroke of lightning, suddenly, without mercy, to cut short the lives of them both.
But whilst saying this, he declared that he seemed to see suddenly the house in which he stood, first torn asunder, and from the roof divided into two in the midst, and a sort of gleaming fire before his eyes (for the place seemed now under the open sky) borne down from the heavenly region close to him; and the heaven itself giving way, and upon the back of the heaven, Jesus, with innumerable angels, in the form of men, standing around Him. This indeed he saw above, and himself marvelled; but below, when Carpos had bent down, he affirmed that he saw the very foundation ripped in two, to a sort of yawning and dark chasm, and those very men, upon whom he had invoked a curse, standing before his eyes, within the mouth of the chasm, trembling, pitiful, only just not yet carried down by the mere slipping of their feet; and from below the chasm, serpents, creeping up and gliding from underneath, around their feet, now contriving to drag them away, and weighing them down, and lifting them up, and again inflaming or irritating with their teeth or their tails, and all the time endeavoring to pull them down into the yawning gulf; and that certain men also were in the midst, co-operating with the serpents against these men, at once tearing and pushing and beating them down. And they seemed to be on the point of falling, partly against their will, partly by their will; almost overcome by the calamity, and at the same time resigned.
And Carpos said, that he himself was glad, whilst looking below, and that he was forgetful of the things above; further, that he was vexed and made light of it, because they had not already fallen, and that he often attempted to accomplish the fact, and that, when he did not succeed, he was both irritated and cursed.
And, when with difficulty he raised himself, he saw the heavens again, as he saw it before, and Jesus, moved with pity at what was taking place, standing up from His super-celestial throne, and descending to them, and stretching a helping hand, and the angels, co-operating with Him, taking hold of the two men, one from one place and the other from another, and the Lord Jesus said to Carpos, whilst His hand was yet extended, "Strike against Me in future, for I am ready, even again, to suffer for the salvation of men; and this is pleasing to Me, provided that other men do not commit sin. But see, whether it is well for thee to exchange the dwelling in the chasm, and with serpents, for that with God, and the good and philanthropic angels."
These are the things which I heard myself, and believe to be true. 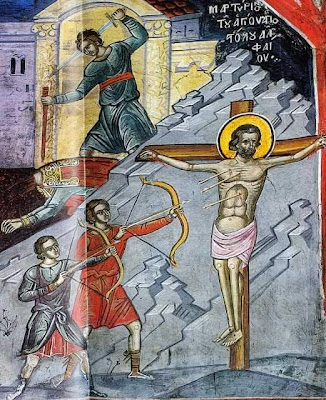 Reflection of St. Nikolai Velimirovich
We should not desire the death of a sinner, but his repentance. Nothing grieves the Lord more, Who suffered on the Cross for sinners, then when we pray to Him for the death of a sinner and thereby to remove him from our path. It happened that the Apostle Carpos lost his patience and began to pray that God send down death upon two sinful men; one a pagan and the other an apostate from the Faith. Then the Lord Christ Himself appeared to Carpos and said: "Strike me; I am prepared to be crucified again for the salvation of mankind." St. Carpos related this event to St. Dionysius the Areopagite and he wrote it down and gave it to the Church as a lesson to all, that prayers are needed for sinners to be saved and not for them to be destroyed, "for the Lord is not willing that any should perish, but that all should come to repentance" (2 Peter 3:9).
Apolytikion in the Third Tone
O Holy Apostle Carpos, intercede with the merciful God that He grant unto our souls forgiveness of offences.
Kontakion in the Fourth Tone
Having thee, O ven'rable Apostle Carpos, as a bright and shining star, the Church is ever made to shine with thine innum'rable miracles. Save them that faithfully honour thy memory.