Saint Kyriakos of Evrychou and the Child With Brain Cancer 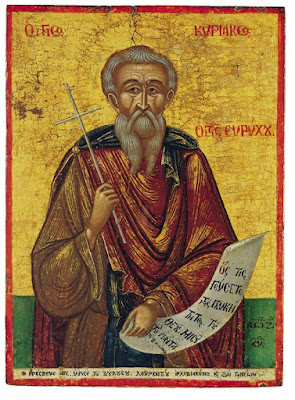 In Larnaka there was a child who was the son of a teacher who suffered with brain cancer, and one night he saw in a dream a revered elderly man who told him:

"What is wrong, my child, that you are in pain and suffering?"

The child replied to him:

The elderly man who appeared to him said:

"Where do you live?" asked the child.

"My home is in Evrychou and I am called Kyriakos."

When the child woke up he told his father about the appearance in his dream, and together they went to Evrychou.

Upon their arrival in the village, they asked if there was a certain Saint Kyriakos in the area, and they were informed the church was a bit to the north of the village. They met up with the priest of the village and together they went to the Church of Saint Kyriakos, where they venerated the tomb of the Saint as well as his icon, after which the child was healed of his ailment.

After thanking the Saint and glorifying God, they returned to Larnaka rejoicing!