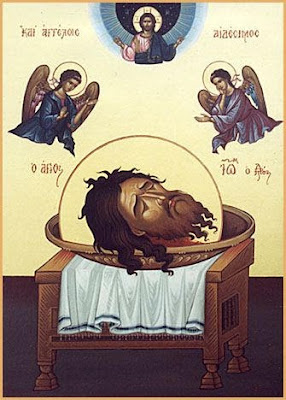 By Presbyter Athanasios Menas
Today we celebrate the Third Finding of the Honorable Head of the Honorable Forerunner and Baptist John. This is the prophet, according to the word of the God-man, who is the greatest of the prophets. He is the preeminent preacher of repentance, for the period when God ordained people to repent until the Second Coming. Those who wish to repent live the Orthodox ascetic praxis.

Remarkable is the emphasis and separation that Christ makes for those who wear soft clothing and live with indifference and unrepentance, in contrast to the humble appearance, works and words of the Honorable Forerunner and the testimony of the Prophets before the Forerunner regarding the person of Jesus Christ.

We know from this period, from the first coming of Christ, with John as a preacher, that the Kingdom of God is taken by violence and the violent seize it by force. In other words, this is the time, the time when Christ reveals to people the bowels of His mercy and compassion, so that those who seek Him may find exactly the way of Truth and Life where there is salvation. It is a wonderful period which falls between the First Coming to the Second Coming, guided by repentance, so that the tears of contrition can bring back the soul of the penitent to the absolute purity and virginity, which was the state of the soul before it tasted of any kind of sin or rolled around in any murky manure.

This miracle, that the soul can become pure and holy and virginal as it was before the fall, has been proclaimed for 2,000 years by the Orthodox tradition through the Saints of our Church, men and women of God, through repentance and tears.

But because the Honorable Forerunner is the greatest of the prophets, we receive the information from the Lord Himself, that at His glorious Second Coming, the prophet who will come before Him will be of the same spirit and the same power as the Prophet Elijah the Tishbite. The only difference is that while the Honorable Forerunner is a preacher of repentance, the wonderful Elijah will be a preacher of justice and retribution, according to the Lord, to all those who believed in Him or did not believe in Him, whether they repented or did not repent.

That is why, my beloved brethren, let us be careful how we manage this present life, which, while it is so short, works our heavenly eternity, so that the preaching of the Honorable Forerunner may benefit us and our work should be completed.

Behold the Honorable Forerunner is before us.

Behold the Prophet Elijah is coming.

Behold the day draws near for our salvation. Amen.