Synaxarion of Saint Makarios Notaras the Archbishop of Corinth 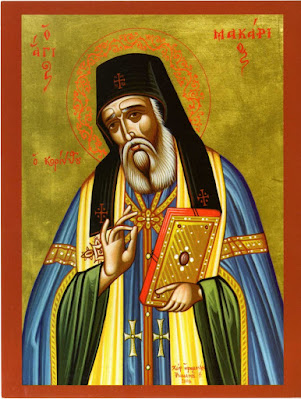 On the 17th of this month [April], we commemorate Saint Makarios Notaras, Archbishop of Corinth.

Offspring of Corinth you are the brightest of Hierarchs,
An intercessor, joy and great aid to all the faithful.
Who is this, who was twice called and showed divine signs?
Splendid Makarios Notaras the most splendid orpyx.
In the middle of April he went to God, having breathed his last.
Saint Makarios, whose secular name was Michael Notaras, was born in 1731 in Trikala of Corinth. He studied in Kefallonia with the famous teacher Eustathios, and served for six years at the school in Corinth, without receiving any salary. Because he had a reputation for virtue and piety, when the archepiscopal throne of Corinth became vacant, the whole of the people of the province of Corinth with one voice sought that he should be made archbishop. Thus, Michael, having first become a monk, at which time he took the name Makarios, was consecrated archbishop in 1765 at the age of 34. His pastoral work was of the greatest value, but did not last long. After some ten years, he was forced to retire, whereupon he went to the Holy Mountain, where he became acquainted with the head of the Athoniada, Athanasios of Paros, whom he took as his spiritual father. After visiting various cities and islands of Greece, he settled in Chios with Athanasios of Paros, and having championed the patristic tradition and revived Greece with the spirit of authentic Orthodox Christianity, which is both neptic and philokalic, he died there in 1805, on 17 April, which is observed as his feast day. 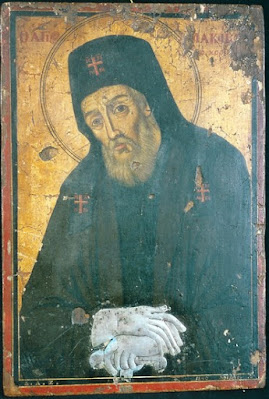 Apolytikion in the First Tone
Let us faithful praise the shepherd of Corinth, who was truly Makarios, who by God’s providence, for reasons ineffable became the great spiritual leader of Chios, him who shone through deeds, words, and prayers; for truly he received from God grace for healing the sick and driving away unclean spirits. Glory to the Father Who destined him, glory to the Son Who elevated him, glory to the Spirit who acts through him.

Kontakion in the Third Tone
The city of Chios divinely honors with praise the president of Corinth, crying aloud: drawn to the Hierarch were the Hierarchs, the Martyrs to the trainer for their contests, and the Ascetics to the one akin to them. By his prayers, save us our God.

Megalynarion
A longing for Christ, O admirable Makarios, possessed your soul from the time of childhood, wherefore you wisely renounced all pleasant things, being God-minded, O holy one. Wherefore God did anoint you with the divine chrism of the august Priesthood, for He foreknows those who are His own.