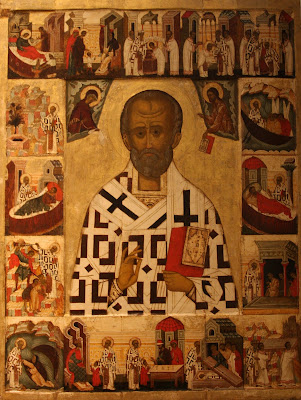 By Archbishop Averky of Syracuse
Today we celebrate the memory of one of the greatest saints of the Church of Christ, our holy father Nicholas, Archbishop of Myra the Wonderworker, who as no one else has been revered at all times by all peoples of the world, not only Christians, but even Muslims and pagans.

“I see, brethren, a new sun rising above the earth and bringing sweet consolation to the sorrowful and suffering,” said the Bishop of Patara as he ordained Nicholas to the priesthood. “Joyous is the flock which will be under his ministry; he will strengthen them in faith in the Lord, he will guide them in goodness and piety, he will be an earnest helper to all those in need.”

St Nicholas’ entire life was a brilliant fulfillment of these prophetic words of the visionary bishop. St Nicholas burned with a passionate faith in God since his youth, being a strict, unbending zealot for the purity of Orthodox Christianity; he was a severe ascetic, in constant vigil, fasting and prayer; forgetting himself, he generously helped the needy, consoled the suffering, defended the innocently condemned; strengthening and guiding those who faltered in the faith; he never tired of performing all sorts of Christian acts of love and mercy to others.

His was in the full sense of the term “a canon of faith,” and “an icon of meekness,” as the Holy Church calls him, and so there is no other righteous saint of God who has been so revered by the people, so lauded and magnified. His sanctity even during his life and after his blessed repose was attested to by a multitude of miracles. There is no other saint who provided such a “sea of miracles” as St Nicholas.

Our Russian Orthodox nation has always particularly revered St. Nicholas, “Nikola the Merciful,” stressing his primary Christian virtue, with which he captivates the heart of mankind.

Not only Christians venerate him, even Muslims and pagans, who see in him a great wonderworker and speedy intercessor for those who are in a crisis. Those who lived on the shores of the Black Sea probably often saw the icon of St. Nicholas on a Turkish felucca (vessel), for the Turkish Muslims had great faith that St Nicholas helps sailors caught in a storm. One can see an image of St Nicholas in the primitive huts of pagans who called him the “kind old man,” and believed in his miraculous aid during times of sickness and sorrows, when mere mortals cannot help.

Our own seafaring vessels, and those of our brothers in the faith, always had an icon of St. Nicholas, renowned as the protector of sailors.
There is a remarkable icon of St. Nicholas in Kiev, known as the “Wet Nicholas.” At the end of the 11th century, a boat carrying a wealthy Kievan, his wife and infant son sped down the Diniepr River to arrive in time for the church feast day celebrations of Sts. Boris and Gleb. The mother fell asleep and dropped the child into the water, where he disappeared. The parents immediately began praying to St Nicholas, and when they arrived at Sts. Boris and Gleb Church, they found their wet son lying on the floor beneath an icon of St. Nicholas. One can only imagine the indescribable joy the parents felt. Since then, this icon of St. Nicholas is located at a chapel in Kiev’s Saint Sophia Cathedral, known as the "Wet Nicholas.”

A great number of churches and monasteries in our Homeland were dedicated to the righteous man of Christ, Nicholas, and many, many icons painted of him which became known to be miraculous. The name Nicholas became one of the favorites throughout the people of Russia.

Alas! in recent times St. Nicholas has not been given the proper veneration in the West, which we first noticed in Western Europe, and then here in America: his glorious persona has been turned into Santa Claus, a source of unworthy amusement. On the night before the holiday, they arrange his so-called "Merry Nicholas evenings" with dances and blasphemous amusements, presenting the glorious saint in some ridiculous form next to the spirit of evil [trans. commonly known as Krampus], placed in the windows of shops, in newspapers and magazines, images and advertisements, demeaning the religious sensibilities of the faithful who honor his memory; his name is used in inappropriate jokes, and children are taught to identify the great man of God with the image a of fat, rosy-cheeked old man with a beard, holding a bell and luring people into gift shops.

What a disgrace! What a shame for contemporary mankind, that while boasting of its “cultural achievements,” cannot honor such giants of the spirit which dwarf today’s silly ways - such was St. Nicholas, everything great and holy has been turned into a mockery. We Orthodox Christians preserve a completely different attitude towards this holy man of Christ, if only we reject the West’s view of him. This Christmas holiday is no time for silly pranks, debauchery and amusement, if only because St. Nicholas’ memory lies within our hearts from our childhood as being foreign to all such nonsense. His holy name, a bright beacon of Christian virtue, reminds us of what should inspire us: pious and trembling veneration of his holy life and Christian deeds.
St. Nicholas teaches us more in our godless times: not to be aloof and disinterested when the impious and godless blaspheme against the holy faith and Church, mock the holy name of Christ and degrade all that is holy. St. Nicholas, attending the First Ecumenical Synod, could not bear the heresy of Arius, who degraded the Divine duality of the Son of God, and in a fit of righteous indignation struck him in the face. This upset many of the participants of the Synod, and they intended on defrocking St. Nicholas. But that night, some of them were enlightened by a vision: the Lord Jesus Christ appeared handing him the Holy Gospel as the Mother of God put a bishop’s omophorion on his shoulders. They understood that the archpastor’s actions were not borne of malice, unworthy of a servant of God, but a result of his fervent zeal and love for Christ the Savior, Who was being disdained by the impious Arius, and they recognized his justice, while Arius was condemned as a heretic.

This fact is deplored by liberal scholars of our time, who preach some sort of post-Christian “ecumenical love” for all heretics and apostates, and they even argue against the fact of St. Nicholas’ very participation in the First Ecumenical Synod, but the Holy Church deems this as a fact and has expressed it in prayer texts and iconography.

Everyone today complains of how difficult life is, about the moral and material crisis, but they take no measures to change the lot of mankind.

What are we to do?

There is only one path - to emulate this great pleaser of God, Bishop Nicholas, not only in our personal lives but in public and civic life as well.

Less noisome but often hypocritical and false words about humaneness, fairness, general contentment and satisfaction, which are so common and which are so irresponsibly disseminated by activists who strive to be leaders of men, mean less than the actual true Christian love and piety in which the life of Nicholas was glorified.

If we truly want good for ourselves and for all of humanity, this great saint must serve as an example to us all.

“O Nicholas, do not cease in praying to Christ God for the faith and love of those who esteem your most joyous and glorious memory!” Amen.
John at 12:53:00 PM
Share
‹
›
Home
View web version