Synaxarion of the Holy Venerable Martyr Conon of Isauria

Verses
God brought him to take a seat among the gods,
Leaving behind your dust in the earth Father Conon.
On the fifth Conon released his stout-hearted soul.
He lived during the time of the Holy Apostles, the son of lieutenant parents Nestor and Nada, and was from a village called Bydane, which was a distance of eighteen stades, or a little over two miles, from Isauria. When he came of age, his parents urged him to take a woman named Anna as his wife. The Saint persuaded his wife to prefer virginity over marriage. So he cohabited with her, but not as a couple, rather as a sister in a community of virginity and purity. There the Saint was led by the Archangel and Chief Commander Michael, who, it is said, appeared to him in a bright garment, taught him the faith of Christ, baptized him in the name of the Holy and Life-Giving Trinity, and communed him with the Immaculate Mysteries. Until the end of the Saint's life, he was not absent from standing by his side invisibly, granting him the power to perform awesome wonders. By this means the Saint persuaded his wife Anna to embrace virginity, and he converted his parents to the faith of Christ and baptized them. 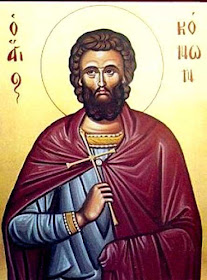 It is said that Nestor, the father of the Saint, was arrested by the idolaters for his confession of Christ as God, and was made worthy of a martyric end. This was followed by a debate and rivalry between Saint Conon and the idolaters, concerning whose God was greater, the one believed in by the Saint or that of the idolaters. For this was a time when the idolaters would enter into a deep dark cave, where they would hold a festival for one of their false gods, and it was agreeably decided, that whoever arrived at the cave first from their two respective places, then their God was the greatest. The idolaters mounted their horses and rushed to arrive first, but the Saint, although he went by foot, arrived there first, and exceeded them so much along the road, that he met them, who were sweating and panting much, along the road after he had arrived at the cave and was returning. The Greeks were in wonder over this strange thing, but became hardened once again, and sought to find out from the same demonic idol whose God was greater. Then the Saint ordered the idol along with the demon of the idol to come down, so the demon came down and approached the feet of the Saint, crying out: "Christ alone is God, whom you preach!" Then the Greeks believed in Christ, and cried out: "The God of Conon is one!", and "The God of Conon has conquered!" Till today such cries are loudly proclaimed by the Isaurians, when the commemoration of Saint Conon takes place. It is said that the divine Conon, received so much power and authority from God against the demons, that he would send some demons to farm the land, others he would send to protect the fruits, while others he enclosed in clay vessels, and put a seal over them, which he would then hide and bury in the foundation of his house. 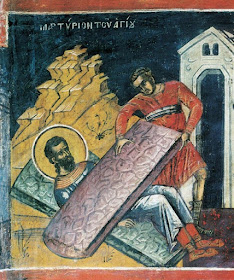 The manner of his martyrdom took place as follows. When the governor Magnos went to Isauria by imperial order, Saint Conon was arrested and brought before him. Having confessed Christ, and not being persuaded to sacrifice to the idols, he was harshly beaten and bound. When the multitude of people learned of this, they went to go rescue him by putting the governor to death, for they all had been illumined by the Saint, and received from him the knowledge of the truth by believing in Jesus Christ. When the governor heard about this, he fled. Letting the Saint loose from his bonds, they washed the blood from his body with a sponge, and he was returned to his house. The Saint spent two years there, then he reposed in the Lord. It is said that, after the Saint died, the Christians wanted to make his house into a church, and while digging, they found those clay vessels which contained the evil spirits. When one of those vessels were opened (for those who were building the church thought they contained gold due to their heavy weight), immediately the demons emerged in the form of fire. Those who were building the church fell to the ground, the church building fell, the wood and the ropes were burnt, and no one was able to approach that place till after sunset. After some time, that place was freed from the trouble of the demons, through the prayers of Saint Conon, and through the praying and fasting of the Christians there. 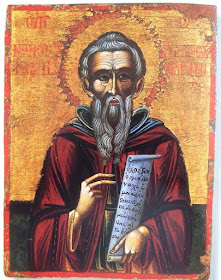 Apolytikion in Plagal of the First Tone
Armed with the grace of the Spirit, thou didst mightily destroy the power of ungodliness, and didst shine forth with miracles. Dyed in the streams of thy blood, O Martyr Conon, thou dost glorify God, Who through thee grants us grace and great mercy.
Kontakion in the Fourth Tone
Thou wast counted worthy of an angelic vision, and initiated into the faith of Christ; thou didst receive the power to work miracles, and didst humble the haughty demons, and quench error when tried by fire. Venerable Martyr and Athlete Conon, pray the Lover of mankind to grant us His great mercy.