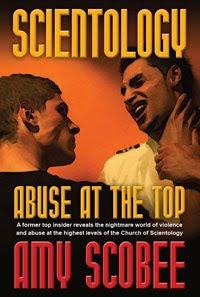 Most people know very little about Scientology aside from the fact that Tom Cruise, John Travolta and other celebrities are a part of it, and that it's had its fair share of controversy over the years. A new book is looking to pull back the curtain on the mysterious religion founded by L. Ron Hubbard, and the author certainly knows her stuff. Amy Scobee is a former Scientologist who was in the church for more than two decades, and worked in the all-important Celebrity Centers portion of the organization. In her just-released book, Scientology: Abuse at the Top, Scobee details all of the troubling things she saw that made her flee what she once called her trusted religion, but now refers to as a "dangerous cult." Scobee spoke exclusively to PopEater over e-mail about her shocking book, her time with Tom Cruise and other Scientology bigwigs, and the (her words) brainwashing, systematic violence and slave labor camps she saw during her 27 years there. Her terrifying claims ... after the jump!