Commemoration of the Miracle of Panagia Antiphonitria at Konstamonitou Monastery 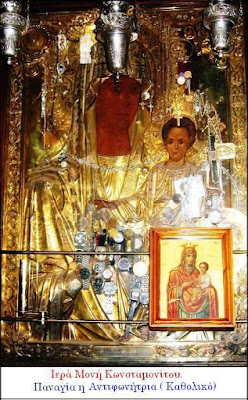 The Panagia Antiphonitria Icon is located in the katholikon of Konstamonitou Monastery on Mount Athos, and it became famous in the following way.
On August 1, 1020, the eve of the monastery’s feast day (Transfer of the Relics of the Protomartyr Stephen from Jerusalem to Constantinople), the ecclesiarch Father Agathon, was overcome with great sorrow. The monastery’s feast day was approaching, and its supplies were so depleted that there was not enough oil to light the church lamps for the solemn celebration.
That night, Father Agathon prayed before the Panagia Antiphonitria with fervent tears. So earnestly did he beg her to help the monastery that he became exhausted. Sitting down before the Icon, he fell asleep at once. In a dream he heard a voice coming from the holy Icon telling him not to grieve, because the church vessels were now filled with oil, and the pantries contained everything that was necessary for the monastery's continued existence. 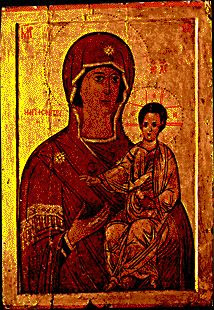 When Father Agathon awoke, he wondered if what he had been told in his dream was true. Hastening to the vessel where the oil was stored, he was overjoyed when he saw that it was filled to the brim. At once, he reported his vision to Abbot Hilarion, the Superior of Konstamonitou Monastery, and to all the brethren.
Everyone went to inspect the pantries and discovered that all the necessary supplies were there in abundance. They rejoiced because now, unexpectedly, they could light the church lamps for the service. Led by Abbot Hilarion, they served the Vigil and sang praises to the Queen of Heaven for the miracle she had performed.
After this event, the wonderworking Icon of Panagia Antiphonitria, before which Father Agathon had prayed, was placed in the monastery's katholikon, on the wall, on the right hand side. Ever since this miracle took place, an "unsleeping" oil lamp remains lit before the Icon.
There are two other Icons of the Theotokos on the Holy Mountain which are also called Antiphonitria - the Paramythia Icon of Vatopaidi Monastery (Janu. 21), and the Akathist Icon of Zographou (Oct. 10). Antiphonitria can be translated as "She Who Responds" or "the Responder".