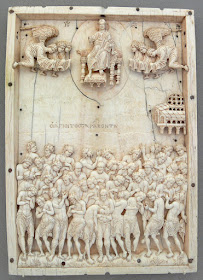 By John Sanidopoulos
On the 9th of March every year, since the fourth century, the Church has celebrated the Holy Forty Martyrs of Sebaste without interruption. This date was established so early after their martyrdom, that it was probably the actual day on which their martyrdom took place. Eventually when the forty-day fast was established in the Church for Great Lent, March 9th always fell within the period of Great Lent, due to the Paschalion reckoning under the Julian Calendar. However, when many Churches updated their calendar to the New Julian Calendar, March 9th would sometimes fall during Great Lent, but other times it did not.
Most would not see this change under the New Julian Calendar as a big deal, since when the Forty Martyrs were martyred, we did not have the forty-day period of Great Lent anyway. This is true. However, in time the Forty Martyrs commemoration during Great Lent became a staple in the life of the Church for many centuries, and because of this the number of martyrs became associated with the number of days in Great Lent. Their feast, since it fell during Great Lent, served as an example to the faithful to persevere to the end of the fast in order to attain the heavenly reward (participation in Pascha, the Resurrection of Jesus), just as the Forty Martyrs endured in the frozen river and were crowned by Christ.
Even in the hymns of the feast an obvious parallel is drawn between the Forty Martyrs and the forty-days of the fast. This can be most notably seen in the Matins Doxastikon for the Praises:
"O victorious Martyrs of Christ, you have made the all-holy Fast even more cheerful by the memory of your glorious contest. Being forty in number, you sanctify the forty-day fast of Lent, for you imitated the saving Passion of Christ by contesting for His sake. Therefore, since you have confidence before Him, intercede for us that we may peacefully reach the three-day Resurrection of our God and the Savior of our souls."
When this hymn is chanted outside of the forty-day fast of Great Lent, it loses much of its meaning. For this reason, I propose that there be a change to the reckoning of the feast of the Forty Martyrs. I'm not saying they should not be commemorated on March 9th, but their primary feast should change to a moveable feast within the calendar of Great Lent. This would make the feast of the Forty Martyrs similar to that of Saint John Climacus and Saint Mary of Egypt. Saint John Climacus is celebrated in the calendar on March 30th and Saint Mary of Egypt is celebrated on April 1st, but because these days often fall during weekdays in Great Lent or Holy Week and cannot be commemorated properly, a special day is appointed for their celebrations so that they also fall on a Sunday in Great Lent (the fourth and fifth, respectively). Something similar is done with many other Saints commemorated during Great Lent, where their feast is moved to the week of Easter (Bright Week) or some other time of the year. Why not also appoint a special day in Great Lent for the Forty Martyrs, if March 9th does not fall within the period of Great Lent? Maybe they can also be commemorated on the Second Saturday of Great Lent, for example?
There is a precedence for doing what I propose. Saint George the Trophy-Bearer is celebrated on April 23rd, and in the reckoning of the Julian Calendar this always falls during the Pentecostarion period after Easter, and the hymns appointed for the feast bear this paschal mark. When the New Julian Calendar was established in the 1920's for many Churches, and it was observed that April 23rd sometimes fell within Great Lent or Holy Week under this new calendar, then the day of April 23rd was kept as the feast of Saint George, but it was not celebrated until the Monday of Bright Week, the day after Easter. However, if April 23rd falls after Easter, then it is celebrated as normal on April 23rd. My proposal for the feast of the Forty Martyrs is most similar to this example of the feast of Saint George.
Though I personally cannot do anything to change the calendar, my hope is that my proposal reaches the attention of a Bishop who can recommend this change to the Ecumenical Patriarchate. Many Old Calendarists consider the way we have things now to be a dilemma and an impediment for them to embrace the New Julian Calendar, but a minor change like this by those who have the authority to do so can change this mindset and open the door to greater unity among Orthodox Christians and confidence in the Church Calendar. It would also assure that the Holy Forty Martyrs of Sebaste always serve as our examples parallel to the forty-day fast of Great Lent.