Homily for the Sunday of the Triumph of Orthodoxy (St. Ignatius Brianchaninov) 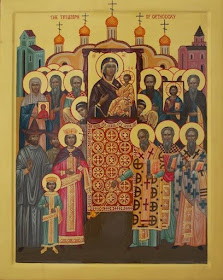 By St. Ignatius Brianchaninov
Orthodoxy is the true knowledge of God and reverence of God. Orthodoxy is the worship of God in Spirit and in Truth. Orthodoxy is the glorification of the true God, the knowledge of Him and worship of Him. Orthodoxy is the glorification of God by man, the true servant of God, given to him through the grace of the Holy Spirit. The Spirit is the glory of the Christian (cf. Jn 7:39).[1] Where there is no Spirit, there is no Orthodoxy.
There is no Orthodoxy in human teachings and philosophies; false reason reigns in them—the fruit of the fall. Orthodoxy is the teaching of the Holy Spirit given by God to man for his salvation. Where there is no Orthodoxy, there is no salvation. "Whosoever will be saved, before all things it is necessary that he hold the Catholic [meaning: universal] Faith. Which Faith except every one do keep whole and undefiled; without doubt he shall perish everlastingly" (from the Creed of St. Athanasius[2]).
The teaching of the Holy Spirit is a precious treasure! It was taught in the Holy Scriptures and the sacred traditions of the Orthodox Church. The teaching of the Holy Spirit is a precious treasure! In it is the guarantee of our salvation. Our blessed portion in eternity is precious; nothing can take its place, and it is comparable to nothing. The teaching of the Holy Spirit is just as precious, just as high above all other values, and a guarantee of our blessedness.
In order to preserve this guarantee for us, the holy Church recounts today for all to hear the teachings that were spawned and published by satan—teachings which are an expression of his enmity toward God, and which suggest slander concerning our salvation, robbing us of it. The Church rebukes these teachings as we would rebuke wolves seeking prey, deadly snakes, thieves, and murderers. Guarding us from them and calling back from perdition those who were deceived by them, the Church anathematizes those teachings and all who stubbornly adhere to them.
The word anathema means severance, rejection. When the Church anathematizes a teaching, it means that that teaching contains blasphemy against the Holy Spirit, and for the sake of salvation it should be rejected and removed, as poison is removed from food. When a person is anathematized, it means that he has irreversibly adopted a blasphemous teaching, and through them deprives himself and those near him, to whom he has imparted his line of thought, of salvation. When a person has made the commitment to abandon the blasphemous teaching and to receive the teachings upheld in the Orthodox Church, he is obligated, according to the rules of the Orthodox Church, to anathematize the false teaching that he formerly upheld, which was destroying him, alienating him from God, keeping him locked in enmity against God, in blasphemy against the Holy Spirit and communion with satan.
The meaning of anathema is the meaning of the Church's spiritual cure of an illness in the human soul, which causes eternal death. All human teachings cause eternal death if they introduce their own thinking drawn from reason falsely so-called, from carnal mindedness—that common heritage of fallen spirits and men—into the God-revealed teaching about God. Human philosophies introduced into the teachings of the Christian Faith are called heresies, and adherence to these teachings is called evil belief.[3]
Hearing today the dreadful pronouncement of spiritual cure, let us accept it with the true understanding of it; and pressing it to our souls, let us sincerely and decisively renounce those destructive teachings that the Church will strike down with anathema unto the salvation of our souls. If we have always renounced them, then through the voice of the Church let us confirm our renunciation of them. The spiritual freedom, lightness, and strength that we will unfailingly feel within ourselves is a testimony to us of the rightness of the Church’s action, and the truth of the teaching it proclaims.
The Church pronounces:
As we therefore bless and praise those who have obeyed the divine revelation and have fought for it; so we reject and anathematize those who oppose this truth, if while waiting for their return and repentance, they refuse to turn again to the Lord; and in this we follow the sacred tradition of the ancient Church, holding fast to her traditions.

To those who deny the existence of God, and assert that the world is self-existing, and that all things in it occur by chance, and not by the providence of God, Anathema.

To those who say that God is not spirit, but flesh; or that He is not just, merciful, wise and all-knowing, and utter similar blasphemies, Anathema.

To those who foolishly say that the coming of the Son of God into the world in the flesh, and His voluntary passion, death, and resurrection were not necessary for our salvation and the cleansing of sins, Anathema.

To those who reject the grace of redemption preached by the Gospel as the only means of our justification before God, Anathema.

To those who dare to say that the all-pure Virgin Mary was not virgin before giving birth, during birthgiving, and after her child-birth, Anathema.

To those who do not believe that the Holy Spirit inspired the prophets and apostles, and by them taught us the true way to eternal salvation, and confirmed this by miracles, and now dwells in the hearts of all true and faithful Christians, and teaches them in all truth, Anathema.

To those who reject the immortality of the soul, the end of time, the future judgment, and eternal reward for virtue and condemnation for sin, Anathema.

To those who reject all the holy mysteries [sacraments] held by the Church of Christ, Anathema.

To those who reject the Councils of the holy fathers and their traditions, which are agreeable to divine revelation and kept piously by the Orthodox Catholic Church, Anathema. (From the Service of the Sunday of Orthodoxy).[4]
Divine Truth became incarnate to save through Himself us who have perished by accepting and adopting a murderous lie. "Then said Jesus to those Jews which believed on him, 'If ye continue in my word, then are ye my disciples indeed; and ye shall know the truth, and the truth shall make you free'" (Jn 8:31–32). Only he is faithful to the teachings of Christ who decisively renounces and ever rejects all those teachings once conceived and still being conceived by outcast spirits and lawless people, inimical to Christ's teaching, to God's teaching—slandering its integrity and inviolability. The integrity of the God-revealed teaching is preserved inviolable solely and exclusively in the bosom of the Eastern Orthodox Church.
Notes:
[1] ("But this spake he of the Spirit, which they that believe on him should receive: for the Holy Spirit was not yet given; because that Jesus was not yet glorified.")
[2] Phillip Schaff, Creeds of Christendom, with a History and Critical notes. Volume II. The History of Creeds (Harper & Brothers: 1877). pp. 66–71. http://www.ccel.org/ccel/schaff/creeds2.iv.i.iv.html.
[3] St. John Climacus, The Ladder of Divine Ascent, Homily 1.
[4]In the rite can also be found these pronouncements:
To those who mock and profane the holy images and relics which the holy Church receives as revelations of God's work and of those pleasing to Him, to inspire their beholders with piety, and to arouse them to follow these examples; and to those who say that they are idols, Anathema.
To those who dare to say and teach that our Lord Jesus Christ did not descend to earth, but only seemed to; or that He did not descend to the earth and become incarnate only once, but many times, and who likewise deny that the true Wisdom of the Father is His only-begotten Son, Anathema.
To the followers of the occult, spiritualists, wizards, and all who do not believe in the one God, but honor the demons; or who do not humbly give their lives over to God, but strive to learn the future through sorcery, Anathema.
Source