The Largest Face of Christ in the Western Hemisphere 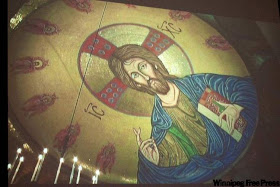 He has worked on the mosaic icons of more than 25 churches in the United States and on the St. Sophia Greek Orthodox Cathedral in London, England.

More recently, renowned American iconographer Robert J. Andrews was in Winnipeg to talk about one of the greatest challenges of his artistic career -- what he says is the "largest face of Christ in the Western Hemisphere."

Speaking to parishioners of St. Demetrios Greek Orthodox Church on Grant Avenue at a catechism session on iconography, the 86-year-old Andrews shared a video and spoke of the massive icon project -- the climax of his 43 years working on the icons of another Greek church, Holy Trinity Greek Orthodox Church in San Francisco. 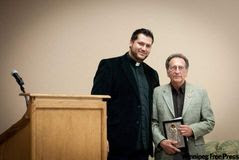 This particular icon of Christ is also known as the Pantocrator in Eastern Orthodox and Eastern Catholic iconography and commonly translates to mean Almighty. In Byzantine church art, it often occupies the space in the central dome of the church.

The giant mosaic of the face of Jesus is 7.5 metres from the top of the head to the chin and spans the church's 3,200-square-metre dome.

More than two million pieces of mosaic glass were used, all imported from Italy, "all hand-cut, and that's why you get such a beautiful reflection."

The tiles are created in a way similar to how it was done thousands of years ago, Andrews says.

The dome is 30 metres off the floor, he adds, requiring scaffolding to be erected. That alone took 10 days to set up. On top of that were smaller, moveable pieces of scaffolding so workers could reach all parts of the dome.

Parishioners raised the $1.7 million originally budgeted for the project.

Because of the weight and pressure of the mosaic, the dome had to first be carefully reinforced with steel beams carried up to the dome, cut and then welded together.

A frame came next in order to create a plaster dome for the installation of the mosaic. A metal mesh, referred to as lath, was attached to the frame so the plaster would have something to stick to.

For 10 months, parishioners attended services in the basement of the church as the pieces of the project slowly came together.

Some 175 bags equalling almost nine tons of added weight were ordered for the plastering of the enormous dome.

Andrews, with his son Tim and an installation crew from the studio in Italy where the tiles were made, began the careful process of giving shape to Jesus' face.

Using a map created in Italy, the team cemented sheets of mosaic tiles to the dome and later peeled off the paper containing Andrews' original drawing.

A final beautification phase revealed the face of Christ surrounded by a golden halo and nine angels, with Jesus holding a Bible in his left hand and his right hand formed to offer a blessing.

"I'd like to remember that a lot of heart went into the whole thing; it was a labour of love in many respects," Andrews says in a documentary about the creation of the icon.

The artist, who specializes in mosaics, told the Winnipeg parishioners he was raised in a very religious family and started drawing icons when he was 13.

"My grandmother was in the Armenian holocaust and I spent summers with her in her house and I spent hours on my knees. My mother, too, was a very religious person. I was really interested in medicine, but we couldn't afford it. My second choice was art and teaching... I worked in iconography and taught for 34 years also."

Andrews credits his family, who worked along with him out of his home studio.

Andrews told the parishioners of St. Demetrios, who have recently begun their own enormous project of adorning their church with icons, he was pleased with the Christ mosaic.

"I have a legacy to leave for many years to come and I knew it would be around much longer than me or anyone else I know."

A documentary on the making of the Christ mosaic can be viewed at www.vimeo.com/1164833.