The Weeping Icons of Camp Nazareth

The following miracle occurred at Camp Nazareth in Mercer, Pennsylvania on July 22, 1988.


By Fr. John Chakos
Every year, for the past eight years, I spend one week of the summer as chaplain of the camp of our diocese. I work with children 13-18 years old together with other clergy, with the purpose of offering to the campers various spiritual opportunities: talks, advice, confession, group discussions, prayer and divine services.

The weekly camping period began on Sunday 17 July 1988, and children and leaders from various parts of the diocese of Pittsburgh gathered.

On Tuesday night we had the so-called "Night of Saints". On this night one child from every team spoke to all the campers about the life of a saint. As the night went on, most of the campers stood up and, in an atmosphere of emotion, spoke about miracles which they saw or heard about.

On Thursday evening we chanted the Supplication to the Panagia. Presiding were Fathers Terry Linos, Michael Varvarelis and myself. At the end I anointed all the children with tears from the miraculous tear-flowing icon of the Panagia of Chicago. This icon is found on the iconostasis of the Holy Church of Saint Nicholas, an Albanian Orthodox parish in Chicago. It began to tear on 6 December 1986 and stopped in July 1987, having done many and great miracles to Orthodox and heterodox.

At the end Fr. Terry Linos brought me a photograph of this icon framed that I may bless it. I gently applied the damp cotton ball on the glass making the sign of the Cross.

On Friday morning a talk was given at the general meeting place of the camp concerning what the Holy Spirit can work for us. Because of this talk, the girls of Saint Markella's Cabin, whose feast it was that day, united in prayer and asked from the Holy Spirit to show then a sign on that day in which their team celebrated its feast. One female camper in fact said the following: "Why can't we also see a miracle in our life?"

On Friday evening all the children were getting ready for the night's "Talent Show" and the ethnic dances. Two hundred visitors gathered in the camping area to attend the event, since it was a day for visitors.

At exactly the moment in which the skits were about to begin, one team leader, Efi Hages, came running close to me. She was very flustered. She took me to the side and explained with tears in her eyes that in Cabin 3 an icon of the Panagia was tearing. I ran there immediately and I saw leaning on a window sill the icon which I blessed the day before following the Supplication Service. It was the copy of the Panagia of Chicago. In front of Her were team leaders kneeling that were clearly moved.

Indeed, from the eyes of the Panagia small drops like tears were streaming down. I reverently kneeled and prayed together with the others. I added my tears also to the tears of the Panagia. After a short quandary I returned to the shed where the skits had begun. I related to the visitors the miracle and invited them to come and venerate.

As the Supplication Service was chanted in the place of the miracle, Fr. Terry anointed those who came forward with cotton balls dipped in oil and tears from the icon of the Panagia. A strong fragrance encompassed the atmosphere. For whoever was anointed it smelled even more distinct, because it came from the essence of that with which they were blessed. One camper from Lorain of Ohio brought his own icon to Fr. Terry to have it blessed.

An hour must have passed after the miraculous event when Efi Hages came to inform me of a second miracle which now was happening in Cabin 7. The icon of the child from Lorain was also weeping and gave off a strong fragrance. I also noticed small oily drops formed on the spot in which the icon was anointed by Fr. Terry. The quantity of liquid which appeared however, could not by any means have come from the touch of a piece of cotton.

We brought this second tear-flowing icon to the chapel, as we did also with the first, to which also many campers came for a vigil and prayer. The sweet fragrance which we noticed first in the cabins and on the icons, was very strong in the church. It was so strong that I could distinctly taste it in my mouth. Some could sense the smell even in the surrounding areas, as far even as the parking lot which was fifty meters from the chapel.

New visitors came continuously when they found out about the amazing news. Through the duration of the night campers brought various icons of paper, wood and canvas to be blessed. In some of these were manifested the same miraculous phenomenon: the tears and the fragrance.

Fr. Michael Rosko, the director of Camp Nazareth, distributed many pamphlets which had on its cover a photo of the tear-flowing icon of Chicago. Some of these, since they were blessed, displayed the same wondrous signs. One pamphlet is worth recalling: I saw on the cover tears like beads which formed by themselves at the eyes of the Panagia and the divine Child, at some distance from the spot on which was anointed with the sign of the Cross.

By the end of the vigil I had counted a total of nineteen icons which had reproduced the fragrant tears.

I understand that all these things are hard to believe. The witnesses of this miracle however are many, at least two hundred: campers, team leaders, visitors, eight priests and two bishops. All these recognize it as a miracle, which is tied to the miraculous icon of Chicago. Others do not agree, and neither are they at duty to do so. For us who believe however, the myrrh-scented tears are shed from the heart of a compassionate Mother, who intercedes for the healing of the sick from the sins of the world.

From the book Ἐμφανίσεις καὶ θαύματα τῆς Παναγίας (Appearances and Miracles of the Panagia) by the Holy Monastery of Paraklitou, 2nd edition, 1991, pp. 94-98. Translated by John Sanidopoulos. 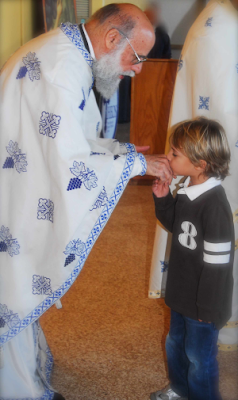 Another 'Miracle' Of Tears Liquid Is Seen On Photo Of Icon
Gloria Campisi
July 28, 1988
The Associated Press
It was just a matter of tradition.

At the evening service last Thursday at Camp Nazareth, a religious camp for teenagers of the Greek Orthodox faith outside Pittsburgh, the Rev. John Chakos dabbed a glass-covered reproduction of the "Weeping Icon of Chicago" with a piece of cotton that had absorbed "tears" from the original.

"I put a little bit of the cotton onto the icon and that was it, a kind of a traditional thing," said the priest, pastor of Holy Cross Greek Orthodox Church in Mount Lebanon, outside Pittsburgh.

"Then we just forgot about it."

The next night, said Chakos, a female camp counselor who had taken the reproduction of the Chicago painting of the Virgin Mary and the infant Jesus to her cabin for safekeeping observed "tears . . . slowly trickling down out of the eyes."

The counselor "thought she was seeing things," Chakos said. "She called a couple of others to check it out. They also saw it happening."

That was just the beginning, he said.

He said he and two other priests brushed off some of the liquid from the weeping reproduction and began dabbing it on "about a couple hundred" icons presented by youngsters, aged 13 to 18, and adult counselors at the camp.

"We counted about 19 total that reproduced the tears," he said. The thick moisture emitted a strong fragrance he described as "perfume-like."

All activities were canceled, and a prayer vigil began that didn't end until the next morning, Chakos said. By Saturday, all the "weeping" had ceased.

The occurrence came after about 200 youngsters and visiting parents discussed their religious doubts at the church camp and Chakos ended the session with a prayer to Saint Markella of Chios, an 8th century martyr beheaded by her father after he attempted to sexually abuse her.

"The children had asked that if other miracles happen, why couldn't they have a miracle?" said Bishop Maximos, who came to the camp after learning of the happening.

Many of the youngsters, who come from Pennsylvania, West Virginia and Ohio, had icons that had been given to them during a visit to a convent of Greek Orthodox nuns, Chakos said.

"There is no explanation for it," said Rosco. He added he expects lots of people to be skeptical about the story. "I know if I was reading it, I would raise an eyebrow, too," he said. "But we know what we saw."

Camp officials would not allow camp children to talk to reporters.

An icon is a painting (or its photographic reproduction) of the Madonna, a saint or some scriptural scene from the Old or New Testament, Chakos said. An icon is given, he said, as "a little remembrance, a little keepsake, a little blessing."

The bishop said he doubted the tears were created by condensation or a chemical reaction, because "you can find no way of justifying the multiplication of weeping."

"Really, a lot of what happened here at this camp ties in to what happened in Chicago," said Chakos, who visited the Midwest church where the Madonna icon was said to weep for more than seven months and ask the priest there "to give me some of the tears.

"He took a cotton ball, absorbed some of the tears."

Moisture began appearing in the area of the eyes of the Chicago icon at St. Nicholas Church, on Dec. 6, 1986, and ceased the following July. Thousands of visitors were drawn to the church from as far away as the Soviet Union and Sri Lanka.

Though many see tears as a sign of sadness, Chakos said, "the background of our church portrays the Virgin Mary as an intercessor.

"It is understood that her tears are a manifestation of her prayers to her son ... tears of supplication."
Below is a television news report on the miracle: