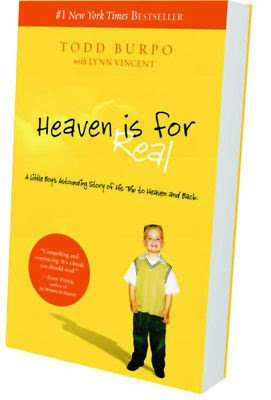 After a recent read of the best-selling book Heaven Is For Real by Todd Burpo, I find it difficult to not be disturbed by it for several reasons. The book is written by the father of Colton Burpo, the four year old who describes his near death experience and vision of heaven in the book. If the book teaches anything, it should be that we avoid being taught about theology and heavenly visions from the experiences of a four year old.

As much as I would love to write a full review of the book, I noticed that pretty much all the points I wanted to mention have already been written in a review which can be read here and here. If the book has captured your imagination, I highly recommend reading through those links.

There are two key factors which prove this was not a near death experience at all. The first is the fact that Todd is honest enough to admit that his son Colton never even died to have such an experience. His heart was beating the entire time without ever flat-lining. If his heart is beating, then his soul is still in his body, which begs the question why he is described as floating around the hospital. Second, the father and mother, who never even show any amount of healthy skepticism over these stories, push the child's imagination to describe things more and more to the point where the son of a pastor can easily come up with the things Colton did. In fact, I find the book to be not a tiny bit exploitative by the parents of this innocent child.

I'm not saying Colton didn't have an experience, though I can undoubtedly admit it wasn't heavenly nor did the real Jesus give him homework as he claims. When I was 4 years old my imaginary friend was Mickey Mouse whom I would talk to like a real person, and if I was asked to describe the Magic Kingdom I probably could, even though I had never been there. And one thing I probably could have said without a doubt was that the Magic Kingdom was real ... and Santa Claus and Rudolph were too for that matter.

With the rich heritage we have through the Prophets, Apostles and Fathers, one wonders why such books are necessary. They simply are not.