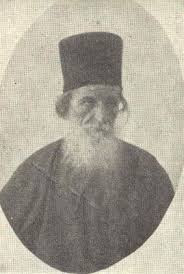 By Monk Moses the Athonite
Elder Daniel of Smyrna was a sacred offshoot and fragrant flower from the martyric land of Ionia. His fragrance brought delight to many, when he was transplanted to the Garden of the Panagia, and the fruits of his virtues as well.
The son of most-devout parents, he studied Holy Scripture and the Philokalia, and graduated with excellence from the Evangelical School of Smyrna. After venerating monasteries and churches in the Peloponnese and the islands of the Aegean, and at the urging of Venerable Arsenios (1800-1877) in Paros, he entered the Athonite Monastery of Saint Panteleimon.
His period of testing was characterized by his constant and willing obedience. At his tonsuring his name was changed from Demetrios to Daniel. Soon he was recognized for his skills and he was made secretary of the monastery, which then had 250 monks. Due to the differences between the Greeks and the Russians he accepted exile which saddened and grieved him. For six months he was given hospitality at the Monastery of Saint Anastasia in Vasilika of Halkidiki, where he became a source of benefit to the fathers there.
Then for five years he lived in the Monastery of Vatopaidi, where he was healed of a severe illness by the Panagia. He very much loved the Panagia throughout his life.
Finally, he went to all-delightful Katounakia. There he founded the Hesychasterion of the Venerable Athonite Fathers. After a few years he gathered a small brotherhood. He guided them with the Philokalia, which he constantly studied and memorized.
His virtue combined with his wisdom, his prayer and his humility, and his study and experience helped him to identify fallacies, to correct those who were in the error of delusion, to heal the demon-stricken, and return to the path of the Holy Fathers those supporters of Makrakis who believed in the tripartite composition of man.
Monks with severe temptations were significantly helped by him and they were grateful. Sick, depressed, mournful, frustrated and troubled people found solace and hope in his words and letters. He himself even left his hesychasterion for the sake of the reconciliation of the brethren.
His letters to monks, nuns, clergy of all degrees, teachers and people with various difficulties are rich. He had a spiritual connection with the author Alexandros Moraitides, later known as Monk Andronikos, who described him as "not a multipurpose and multicolored tyrant, but a much-wearied monk," who offered as dessert "words distilling heavenly sweetness." He also said: "When I came to the Holy Mountain I thought I touched God, but when I met Elder Daniel then I realized how far God was from me."
Elder Daniel had an important acquaintance, friendship and correspondence with Saint Nektarios (1846-1920). The Saint wrote to him humbly about his nuns: "This letter, dictated by praxis and theoria, is for them, being deprived of such a living teaching, a spiritual delight and true spiritual support."
In addition to his many letters, a fruit of his wisdom is the around seventy works of his on serious spiritual matters, especially of an anti-heretical and spiritual construction.
For fifty years in Katounakia with his words, writings and paintbrush he created a famous house of virtue, iconography, writing, music and hospitality. His door was always open for everyone to find rest.
He became a physician, a guide, a liberator of those people who suffer, who are in error, who are troubled, who are distressed. He did not tire to keep vigil all night and write letters and studies to support and enlighten his beloved brethren.
The greatest happiness of his life was when he departed the earth on the day of the Nativity of his beloved Theotokos. After divine Communion and sacred Unction, joy was vividly painted on his face.
His fervent love for the Theotokos, which is a characteristic of all virtuous Athonites, sealed his life.
Elder Daniel was undoubtedly through his words and works an enlightened, discerning, wise guide, "full of the Holy Spirit." May his prayers accompany us.
His head is kept with reverence in a wooden case and has a yellowish-brown color. We venerated it on the 80th anniversary of his blessed repose. We delivered a simple but heartfelt, laudatory speech during the vigil of the memory of the Venerable Athonite Fathers (2009).
Source: From the book Great Gerontikon of Virtuous Athonites of the Twentieth Century (in Greek). Translated by John Sanidopoulos.