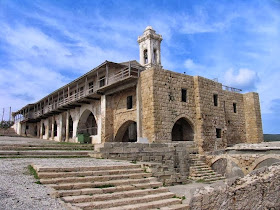 September 17, 2013
Cyprus Mail
The United Nations Development Programme (UNDP) signed on Tuesday two contribution agreements with the Church of Cyprus and the Turkish Cypriot religious foundation Evkaf, marking the beginning of much-delayed plans to restore the crumbling Apostolos Andreas monastery in the Karpas peninsula.
The UNDP said both the Church of Cyprus and Evkaf signed two contribution agreements worth € 2.5 million each for the monastery’s restoration.
This follows a February agreement with the bicommunal technical committee on cultural heritage that is facilitating the restoration.
The UNDP will be implementing the project.
Signing the documents “is proof of what can be achieved through collective and bicommunal cooperation at the level of the technical committee for the preservation of the common cultural heritage of Cyprus,” said committee chairman Takis Hadjidemetriou.
Restoration works will take place according to a study by Greece’s University of Patras.
It will have four distinct phases.
It has taken years to reach consensus on the restoration of the monastery, one of the most important religious sites to Greek Orthodox pilgrims.
John at 11:42:00 AM
Share
‹
›
Home
View web version