On the Destruction of the Eight Passions 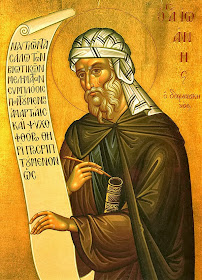 By St. John of Damascus
You should also learn to distinguish the impassioned thoughts that promote every sin. The thoughts that encompass all evil are eight in number: those of gluttony, unchastity, avarice, anger, dejection, listlessness, self-esteem and pride. It does not lie within our power to decide whether or not these eight thoughts are going to arise and disturb us. But to dwell on them or not to dwell on them, to excite the passions or not to excite them, does lie within our power.
In this connection, we should distinguish between seven different terms: provocation, coupling, passion, wrestling, captivity, assent (which comes very close to performance), and actualization. Provocation is simply a suggestion coming from the enemy, like "do this" or "do that," such as our Lord himself experienced when he heard the words, "Command that these stones become bread." Coupling is the acceptance of the thought suggested by the enemy. It means dwelling on the thought and choosing deliberately to dally with it in a pleasurable manner. Passion is the state resulting from coupling ... it means letting the imagination brood on the thought continually. Wrestling is the resistance offered to the impassioned thought.... Captivity is the forcible and compulsive abduction of the heart already dominated by prepossession and long habit. Assent is giving approval to the passion inherent in the thought. Actualization is the putting the impassioned thought into effect once it has received our assent. If we can confront the first of these things, the provocation, in a dispassionate way, or firmly rebut it at the outset, we thereby cut off at once everything that comes after.
These eight passions should be destroyed as follows:
gluttony by self-control;
unchastity by the desire for God and longing for the blessings held in store;
avarice by compassion for the poor;
anger by goodwill and love for all men;
worldly dejection by spiritual joy;
listlessness by patience, perseverance, and offering thanks to God;
self-esteem by doing good in secret and by praying with a contrite heart;
and pride by not judging or despising anyone in the manner of the boastful Pharisee, and by considering oneself the least of all men.
When the nous has been freed in this way from the passions we have described and been raised to God, it will henceforth lead the life of blessedness, receiving the pledge of the Holy Spirit. And when it departs this life, dispassionate and full of true knowledge, it will stand before the light of the Holy Trinity and with the divine angels will shine in glory through all eternity.
From On Virtues and Vices.