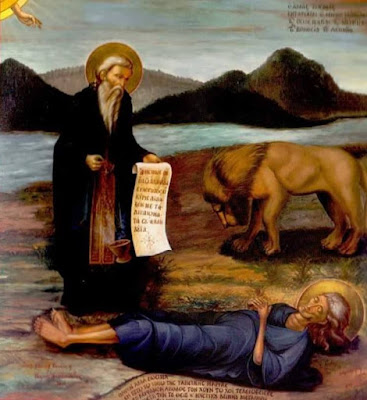 2. Theological Lessons from the Life of Saint Mary of Egypt

Already in the brief presentation of the life of Saint Mary of Egypt, which we have just read, the great personality of Saint Mary was clearly seen, but at the same time the power of the Grace of God was revealed, which regenerated her from the woeful state in which she was.

There are many theological lessons that come out of the life of Saint Mary of Egypt, but it will suffice to point out the most basic in a very concise way.


First. The Mystery of Baptism and Chrismation.

Saint Mary of Egypt was baptized from her young age and together with Baptism, as it is done, she also accepted Holy Chrismation. However, after Baptism she fell into a prodigal life.

She herself confessed to Abba Zosimas: "I am a sinful woman, though I am guarded by Holy Baptism." After being baptized she lived a sinful life, and made the members of Christ members of prostitution, but this gift of baptism enabled her, through the baptism of repentance, to return to Christ and for her members to become members of Christ.

The Baptism that we receive at a young age is called a bath of new generation because it regenerates us into a new life. With Baptism we return to the state in which Adam was before the transgression, making it a gift of the Church so that we can get rid of the garments of skin which represents corruption and death. Athanasios the Great calls Holy Baptism "cultivation towards immortality". Basil the Great considers it a "vehicle to heaven, a citizenship of the kingdom, a gift of adoption."

In fact, Baptism is the spiritual vaccine that they give us at a young age so that we can, when we grow up with our freedom, overcome sin, the devil and death. This does not mean that we are deprived of the great privilege of freedom, which is a gift, which God gave us with our creation.

Because we are not deprived of our freedom by Baptism and one can choose to sin even after Baptism, we still do not have the ability to deny God. According to Saint Symeon the New Theologian, "our self-control and self-will do not disappear with Baptism, but freedom is given to us so that we no longer are involuntarily tyrannized by the devil." Therefore the gift of Holy Baptism is given to us so that the devil cannot enslave us without our will, which means that it strengthens our freedom to succeed in our spiritual struggles.


Second. The Gift of Repentance.

The repentance of Saint Mary of Egypt, which took place with the Grace of God and the blessing of the Panagia, was expressed to a great degree. She denied the world to the perfect degree, renounced all the wills of the old man, transformed all her psychosomatic powers, and thus not only restored the Grace of Baptism, but also lived the blessed state of deification.

Saint Mary of Egypt lived to a great degree what many desert ascetics lived, who heard a word, either from the revelatory presence of God or from the Elders, and then went off into the desert in order to put that into practice in their lives. This is because every revelatory word has great energy and it takes many years of asceticism, by the Grace of God, to live it.

This happened to Saint Mary of Egypt. For forty-seven years she struggled to apply the revelatory word she heard in the church in Jerusalem and to assimilate the experience of Grace that she was found worthy to receive with the veneration of the Honorable Cross and the voice of the Panagia. This also took place with the energy of this word.

At the same time, one can distinguish in her words, various phrases of self-denial. She feels powerless in her works, considers herself responsible for her previous life, calls herself a prodigal, "a sinful woman", "a woman naked of all virtues".

Repentance, which happens by the Grace of God and the synergy of man, activates the Grace we receive with Holy Baptism and Holy Chrismation, which, according to Saint Diadochos of Photike, is in the depths of the heart and is covered over by the passions and revealed with repentance.


Third. The Ascetic Life as the Experience of the Mystery of the Cross.

She felt deep repentance and prayed to the Panagia to find her worthy to venerate the honorable wood of the Cross, and if this was done she would change her life, she would not defile her flesh by any act and she would leave the world and all that is in the world. She said to the Panagia among other things: "Allow me to see the Wood on which He Who was born of you suffered in the flesh and on which He shed His holy Blood for the redemption of sinners and for me, unworthy as I am." And then she prayed to the Panagia: "O Lady, order the entrance of the church to be opened to me. Be my faithful witness before your Son that I will never again defile my body by the impurity of fornication, but as soon as I have seen the Wood of the Cross I will renounce the world and its temptations and will go wherever you will lead me."

Then she entered the Sacred Temple unhindered and arrived before the holy objects where she was found worthy "of seeing the life-giving" Cross and beheld "the mysteries of God" and confirmed how ready He was to receive her repentance. Throwing herself on the ground and venerating that holy place, before the Panagia she promised that she would fulfill her pledge. And of course then, as we have seen, at the urging of the Panagia, she proceeded to the desert to practice the struggle of purification from passions and her sanctification.

This shows that Saint Mary venerated the Honorable Wood of the Cross, received great power and energy from it, and then walked into the desert to experience the mystery of the Cross spiritually, throughout her life. This is expressed in the words of Christ: "Whoever desires to come after Me, let him deny himself, and take up his cross, and follow Me" (Mark 7:34), and the passage from the epistle, which says: "Those who belong to Christ Jesus have crucified the flesh with its passions and desires" (Gal. 5:24).

Saint Mary herself described to Abba Zosimas the struggle she made to transform her life, to defeat her old man with its passions and desires. As soon as a thought came that ignited within her and lit in her the fire of carnal sin, she threw herself on the ground, she bathed the ground with tears and did not get up, as she herself said, "until a calm and sweet light descended and enlightened me and chased away the thoughts that possessed me."

This shows that Venerable Mary of Egypt venerated the Honorable Cross with spiritual inspiration and with its power experienced the mystery of the Cross in her life, with the struggle she waged against thoughts and carnal desires. And this was connected with the vision of uncreated light. The Cross and Resurrection are closely connected. This in patristic theology is called the experience of the mystery of the Cross.


Fourth. The Experience of the Mystery of the Cross and the Resurrection of Christ.

The life of Saint Mary of Egypt is closely connected with the partaking of the deifying energy of God. We see this intensely in her whole life, that is, in the unceasing prayer she had, in the vision of the uncreated light she received, in the constant communion with God she experienced. Thus she achieved the purpose of her existence, which is not a moral life, based on humanitarian principles, but deification.

According to the teaching of our Church, the incarnation of Christ had as an aim the deification of human nature and then through the deified human nature that took place in the hypostasis of the Word, all those who partake of the Incarnate Body of Christ can be deified through the sacrament and through asceticism in Christ. According to Saint Maximus the Confessor, the deification of man is closely connected with the incarnation of Christ. He writes: "He deified us by Grace, in as much by the economy He became man."


Fifth. The Suspension of Bodily Energies.

In the life of Saint Mary are clearly seen the effects of her deification, which is the suspension of her bodily energies, as manifested in the inability to receive food, the transformation of her body that she endured in the environment, her ability to travel long distances in a short time, the elevation of her body above the ground during the time of prayer, walking on water, etc., as we saw in her short biography above.

In patristic teaching it seems that the body is also reformed during deification, and of course during deification all bodily energies are suspended, that is, the need for self-preservation, the digestion, even the secretions of the body. This is seen in the lives of the Prophets and the Apostles, as described in the texts of the Old and New Testaments.

Therefore, the body receives the shining of the soul in the course of the rebirth of man. Just as the removal of the Grace of God from the soul has consequences on the body, so the partaking of uncreated Grace from the soul is also transferred to the body, due to the close relationship between soul and body. The regenerated man acquires the experience of the pre-fallen state, as well as the eschatological life, that is, the life of the saints of the Kingdom of Heaven.