Venerable Hilarion of Gdov and Pskov Lake, was a disciple of Saint Euphrosynus of Pskov (May 15), founder of the Spaso-Eleazarovsky Monastery. In 1460 on the banks of the River Zhelcha, not far from Gdov, he founded the Ozersk Lake Monastery of the Protection of the Mother of God. The monastery bordered the territory of the Livonian Knights, and the monks constantly suffered the incursions of that military order.
Despite harsh conditions and insufficient means, Saint Hilarion maintained a high level of pious and ascetic life at the monastery, and made great efforts to adorn and build up the monastery. Nourished with herbs and roots, he cleansed his mind with spiritual contemplation and was in a relentless struggle with invisible spirits. 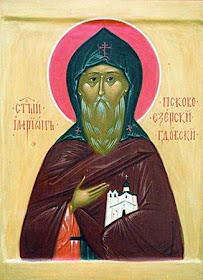 During his lifetime, Saint Hilarion prayed in the hollow of a tree. This pine tree is still preserved in the chapel not far from the Protection Church. The tradition has survived that he already in his earthly life possessed the grace of knowing who came with what issue and who is was at war with what passion. The monk's whole life consisted of constant work, a compulsion towards all good, attention to oneself, vigils, prayer, divine thoughts, abstinence, meekness, humility and total devotion to the love to God. 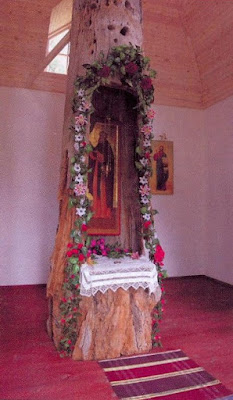 Saint Hilarion reposed on March 28, 1476 and was buried in the Church of the Protection of the Most Holy Theotokos in the monastery he founded. Afterwards, a church was built at the monastery in honor of the Nativity of Christ. The left chapel was dedicated to the founder of the Gdov monastery. Saint Hilarion of Gdov is also commemorated on October 21, on the feast of his heavenly patron and namesake. 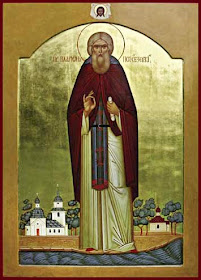 By decree of Catherine II, the monastery was abolished, and the Protection Church became a parish. The last service in the temple took place in 1942. In 1993 services resumed. Two bells of the Protection Church, cast by personal order of Ivan the Terrible in 1570, are in the Pskov Museum-Reserve, and today there are five new bells on the bell tower of the church. The relics of the Saint are still preserved there.