Saint Adrian of Poshekhonye was born at Rostov the Great at the end of the sixteenth century, of pious parents named Gregory and Irene. Saint Adrian received monastic tonsure at the Monastery of Saint Cornelius of Komel.
Among the brethren gathered around Saint Cornelius were some capable builders and iconographers, so the monastery churches were constructed and adorned by the saints themselves. In the final years of Saint Cornelius’s life, Kazan Tatars invaded the territory around the monastery, and he led all the brethren to the River Ukhtoma. But the Tatars did not touch the monastery, being frightened off by the sight of the many soldiers defending it, and they soon withdrew from the Vologda district. Saint Cornelius returned to the monastery with the brethren and reposed there on May 19, 1537.
Three years after the death of Saint Cornelius, Saint Adrian, then a hierodeacon, greatly desired to go into a wilderness place and found a monastery in honor of the Most Holy Theotokos. The Lord helped him fulfill his intention. A certain unknown Elder of striking appearance came to the Corniliev Monastery. Saint Adrian asked him his name, and the Elder referred to himself as “the lowly one.”
When Saint Adrian invited him to his own cell and asked him to say something beneficial for the soul, the Elder said that he would show Saint Adrian the spot where he should build the church and monastery of the Most Holy Theotokos.
Saint Adrian immediately went to the abbot Laurence, and sought his blessing to live in the wilderness. Recalling Saint Cornelius’s order that any monks who wished to withdraw into the wilderness should be released from the monastery, Abbot Laurence did not hinder Saint Adrian but gave him his blessing. He also sent with him his assistant, Elder Leonid. After they prayed at the grave of Saint Cornelius, Saint Adrian and Elder Leonid went on their way, led by the mysterious black-robed monk. Saint Adrian carried with him an icon of the Dormition of the Mother of God, which he also painted.
On September 13, 1540, the eve of the Feast of the Exaltation of the Cross of the Lord, Saint Adrian and Elder Leonid arrived in the wild Poshekhonye forest, near the settlements of Bely, Patrabolsha, Shelshedolsk and Ukhorsk.
They halted at the banks of the River Votkha. There the Elder leading them suddenly became invisible. The astonished travelers began to chant the Canon and Service of the Feast, with tears of thanks to God. Indeed this was a portent of the future fame of the monastery, a place where God would be glorified.
Then, in all the surrounding villages, the people heard a ringing in the dense wild forest, and after that, over many days in all the surrounding villages, they heard the same thing.
After Adrian and Leonid thanked God for all that happened, they placed the icon of the Most Holy Theotokos on a large oak tree near the Votkha River and walked for a long time through the oak grove, looking for ways to the districts inhabited by people and choosing places where they could put a chapel for prayer for the salvation of their souls. 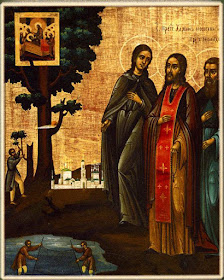 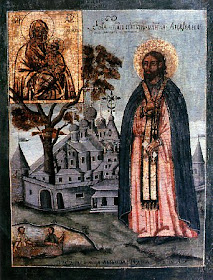 In 1612 the church clerk John Prokofiev went out to the village of Guzhneva where annually the people worshiped an ash tree in honor of Saint Paraskeva. John Prokofiev told them they should not do this, but instead to build there a church dedicated to the prophet Elias and Saint Paraskeva to worship God. The villagers liked this and asked for his help in doing so. The land of this estate belonged to Irina, the widow of Cornelius Cheglokov. God inspired John Prokofiev to go to the widow of Cheglokova and ask her for permission to create a church in the name of the Prophet Elias and the Martyr Paraskeva. The widow Irina Cheglokova not only ordered John Prokofiev to build a church, but also asked him to accept the priesthood in order to serve in that church and be its spiritual father. In 1612 the church was complete and John was ordained a priest and served there.
Not long after the death of the widow, the land of the Church of the Prophet Elias and the Martyr Paraskeva was placed under the abbot Laurence of the Holy Trinity Monastery. And it happened that a man named John Sidorov, now a monastic called Elder Jonah, was a spirtual son of Abbot Laurence. Before his death in 1626, feeling its approach, he told his spiritual father the following about the Holy Martyr Adrian: “Forgive me, Holy Father, for God's sake, I hid from you hitherto what my father Sidor told me, leaving this world. He told me: 'My son, John! In the past, in 1550, on March 5, the villagers came to the Votkha River to rob the monastery. Having tortured its abbot Adrian, they brought his body to the border of the White Village and Shigorosh on the River Ushloma and threw him into the creek of that river.' And my father Sidor, of the village of Ivanniki, and his neighbors brought the body of Abbot Adrian to an empty place to the empty church of the Prophet Elias on Uhra, where our Monastery of the Prophet Elias stands. They dismantled the platform of that empty church, dug a grave beneath it and buried Adrian’s body at night without a service, fearing the removal from by the elders. And in that church placed for signs for the future, they planted a small mountain ash, which is now a large and beautiful tree. And above all, in that tree in an empty place many healings from diseases were performed, only they did not pay attention to them and did not write them down, since there was nobody to write them, because the place was empty."
Soon after Abbot Porphyrius of the Dormition Monastery visited his spiritual father, who was Elder Laurence. Elder Laurence told him about the body of Saint Adrian and where it was located according to the testimony of Elder Jonah. After receiving permission from the authorities to look for the body and transfer it to the Dormition Monastery, the abbot and the brethren began their search. Abbot Laurence indicated a spot with his staff, and there they dug near the ash tree. The body of the Saint was miraculously found. The holy relics of the Holy Martyr Adrian were found on November 19, 1625 and found to be incorrupt. On December 17, 1626 they were solemnly transferred into the monastery church and placed in an open crypt by the right kliros (choir). Many miracles occurred at the grave of Saint Adrian.