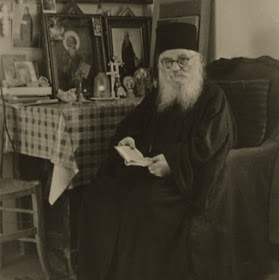 Elder Hieronymos at the Dependency of the Ascension (1931-1957)
Athens in 1931 was a city with a low level spiritual life. The Fathers of the Church were virtually unknown. Monasticism was regarded as an old glory of the Church that was not needed today. The city was full of poor people. It was a poverty that was inherited - by orphans, through wars, and by refugees. At the settlement of Byron, where the Dependency of the Ascension was located, refugees from Asia Minor lived there, who continued to maintain their pure lay piety and who gladly accepted him as God's messenger.
Until the end of his life illnesses would not leave him - continuous fevers, headaches, weakness, fatigue, bronchitis and blood illnesses. When he reposed his entire body was full of cancer. He never said how much pain he was in. In his perseverance and by the love of doctors he took medicine. One day he refused to take his medicine, saying: "Not today, it is the feast of the Holy Unmercenaries and they are physicians." After his repose they found a lot of unused medicine in his cupboard. The pressure of the doctors did not allow him to admit the need for them and give the flesh what it needed. Voluntary and involuntary pain is an ascetic exercise, which is a means towards sanctification, a proof of submission to God.
Moreover, the various temptations never left him. He would say: "They are as necessary as breathing. Temptations are like the waves of the sea; without waves one cannot travel and without temptations one cannot be saved." His experience gave him the comfort to talk to his children about the great benefits of temptations, which only tire carnal people.
He patiently loved everyone. Instead of the Elder being annoyed when someone was bothering him, his spiritual children were greatly saddened, to whom he said: "Keep calm, despite all this he still loves me."
In 1949 his monastery, after slanderous complaints, considered recalling him. They mainly accused him of "wasting large amounts of money." The love of his children did not allow the recall to take place. In the many warm letters to his monastery, respect and love towards him is revealed.
The recall did not take place, but decisions were made binding for him a comfortable course for his spiritual work. He endured it all, with the humility that distinguished him, without discussion and objection, but not without pain. He had surrendered all to God, and he only looked towards Him. Neither did praises give him joy, nor did accusations give him sorrow.
His first visitors were mainly ordinary people in the surrounding area. His love made him famous, so that the bench outside his confessional was never empty of people, who had been waiting patiently for their turn for hours. Many people came to entrust to him their pain. As austere as he was towards himself, the more lenient he was towards others. Fr. Hieronymos was primarily the spiritual father of a large crowd wounded by sin. He stood as a tender physician, an excellent curator of souls, a friend who sympathized with the defeats and rejoiced with the victories, a discreet guide, a careful counselor, tireless, calm and sweet.
In the early years he would confess standing up. He would begin after liturgy and would end many times after midnight. Often, in order to gain time, he would eat or read letters and confess. Every time his answers showed how much he carefully listened. Even though many waited for him, he was never in a hurry. This was true even when he was sick. He would say: "Go on, let the others wait. I want to listen to you."
He saw souls as an open book. His knowledge of the human soul was amazing. Rarely did he ask questions from those who confessed. When he would be asked why he doesn't help with questions, he responded: "I don't want to put sins on you that you didn't think of yourself. Everyone knows well what they have and what burdens them." Before the confession he would always offer something, he would smile, he asked about your work, and then he would put on his priestly stole.
He would listen carefully to confessions then he gave a response. Sometimes he looked like he was sleeping or he would close his eyes either due to fatigue or to concentrate, to increase his attention and give comfort to the one confessing, so as not to look them in the eyes.
He utilized everything to help those who were hurting, not counting the time or effort. His greatest joy and reward was when he saw people who were truly repentant. Sometimes, if you did something wrong, he tried in various ways to bring you into such a state of repentance in order to manifest it, without offending you or hurting you in the slightest. He had an ancient nobility, one that all spiritual people are adorned with. His greatest sadness was seeing souls come out of the confession with yet another sin. A willful confession that wasn't pure.
In the end he warmly thanked you, because you trusted in him. If you went for the first time, he would keep your name, and pray for you daily. He did not allow you to feel hopeless. He knew how to comfort souls. "This is why I'm here, this is my job," he would say. He would talk about the infinite mercy of the All-Good God, the intercessions of the Saints and of the Theotokos.
Part Three
John at 11:14:00 AM
Share
‹
›
Home
View web version