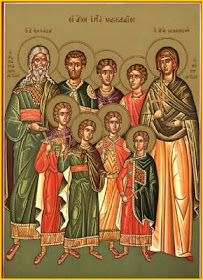 On the first of this month [August], we commemorate the Holy Seven Maccabee Martyrs: Abim, Antonius, Gurias, Eleazar, Eusebonus, Alimus and Marcellus, together with their mother Solomone, and their teacher Eleazar.
Verses
To Eleazar
You were the first before Christ who endured the flames Eleazar,
Your contest was an example to those who followed your footsteps.
To Solomone
We have another first contestant even before Thekla,
Solomone, who was consumed by fire before Christ.
To the Seven Maccabees
On the sixth of the seventh the seven children were sent,
Through the assault of flames and wheels towards the eighth.
On the first Solomone and her seven sons were consumed.
These Saints lived during the reign of King Antiochus (175-164 BC) of the Seleucid Empire. On the 5327th year from the creation of the world, or 173 years before Christ, they were compelled by the above mentioned Antiochus (who killed and enslaved the entire Hebrew race) to deny the customs and orders that had been handed down by the law and their ancestors, namely to not eat pork. Therefore, because they were compelled to do so by the tyrant, they were not persuaded, along with their teacher Eleazar, keeping the command of the divine law, which says: "And the pig, though it has a divided hoof, does not chew the cud; it is unclean for you. You shall not eat of their flesh nor touch their carcasses; they are unclean to you" (Lev. 11:7-8).
For this reason they tied the hands of Saint Eleazar behind his back, and beat him harshly. They then poured in his nose some dirty and pungent liquid. Then he was cast into the fire, where he prayed that his blood and death become the means by which is accomplished the redemption and liberation of his race, thereby delivering his soul into the hands of God. 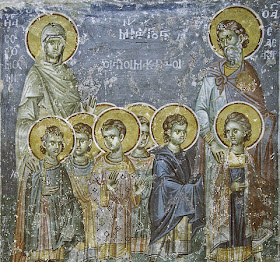 This was followed by the Holy Seven Children being brought before the tyrant, and he punished them, each according to their age, with wheels, poles, fires and other instruments of torture, which disjointed their body. Hence these blessed children died by means of these torments, showing that our thoughts are lord and emperor over our passions. And if we are willing, it is impossible to be conquered by them.* They therefore received from the Lord the crowns of the contest.
After these things their mother Solomone, seeing how bravely her seven children were perfected, rejoiced. Wherefore without anyone placing their hands on her, she went of her own accord and cast herself in the burning fire, thus delivering her soul into the hands of God.** Their Synaxis is celebrated in their martyric Temple, located in the portico of Domninos, and beyond Elaia.
Notes:
* This reflection is based on the discourse of Flavius Josephus "On the Martyrdom of the Maccabees".
** The incorrupt relic of Saint Solomone is located at the Patriarchate of Constantinople. Another portion of her relic is found at Xeropotamou Monastery at Mount Athos. A portion of the relic of Saint Eleazar is located at Panteleimonos Monastery at Mount Athos. Portions of the relics of the Seven Maccabees can be found in various places in both the East and West. 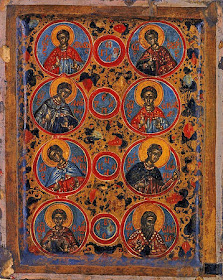 Apolytikion in the Fourth Tone
Let us praise the seven Maccabees, with their mother Solomone, and their teacher Eleazar; they were splendid in lawful contest, as guardians of the teachings of the Law. Now as Christ's Holy Martyrs they are interceding unceasingly for the world.
Kontakion in Plagal of the Second Tone
You seven pillars of the wisdom of God, you seven-branched candlesticks of the Divine Light, you were great martyrs before the time of the martyrs, O supremely-wise Maccabees. Together with them pray to the God of all, that those who venerate you may be saved.
John at 4:38:00 PM
Share
‹
›
Home
View web version