Both Anastasios Paneras and Demetrios Begiazis were from the island of Lesvos, with the former born in the village of Asomatos and the latter in the village of Hagiasos. They were probably related to each other, as these villages are situated next to each other.
Anastasios took on the family trade of basket-weaving, and would sell the baskets door to door. When he got older, he decided to go to Asia Minor to make a better living.
Demetrios was from a poor family, and together with his brother Vranas he was orphaned of a father at a young age. Their mother remarried, but their stepfather was very hard on them, often depriving them of food and clothing. For this reason they would often not go home to sleep.
One day a Turkish Muslim saw what was happening with Demetrios and felt sorry for him, so he decided to take him under his wing. Informally he adopted the boy and supported him until he came of age, at which time he sought to have him marry his daughter and convert to Islam. Demetrios however refused to change his faith, and to avoid any further pressure he decided to go to Asia Minor, specifically to Kasampa, where he met Anastasios and joined him in basket-weaving. 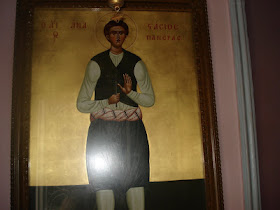 They usually worked outdoors where they were observed by many who admired their skill and industry. They were admired by the Christians, and in turn Anastasios and Demetrios encouraged them in their Orthodox Christian faith despite the pressures of society which favored the Muslims. Certain Muslims decided that it would be a good idea if they were both converted to Islam, so they approached them and told them of the advantages of being a Muslim, including the right to have many wives. Anastasios, who was twenty years old at the time, and Demetrios, who was eighteen years old, responded that they were Christians, and that their faith did not permit such things. This offended the Muslims, so they brought an accusation against Anastasios and Demetrios before the court for blasphemy against the teachings of Muhammad.
In court the judge used flatteries at first to persuade them to abandon their Orthodox Christian faith, but when they refused the judge turned to issuing threats of torture and death. After being tortured, they remained steadfast in their faith in Christ, therefore they were sentenced to death. The Holy Neomartyrs were therefore hanged from a plane tree on August 11, 1816 (according to some it was 1819). Christians recovered their bodies and had them buried with great honor.
Their relics were sources of healing for those who came with faith to venerate them. In 1907 the residence of Hagiasos in Lesvos sought to bring the relics of Saint Demetrios back home, but various events as well as the Asia Minor Catastrophe prevented this. In Asomatos and Hagiasos magnificent churches were erected in their honor. 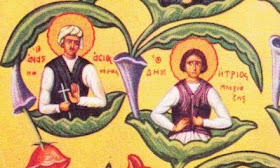 Apolytikion in the Third Tone
Divine saplings of the island of Lesvos, manifested in these latter times, Anastasios and Demetrios, of one mind you contested for Christ, and you put to shame the ancient enemy. New Martyrs, intercede with Christ God, to grant us the great mercy.