Genesis 24 and the Mission of John the Baptist 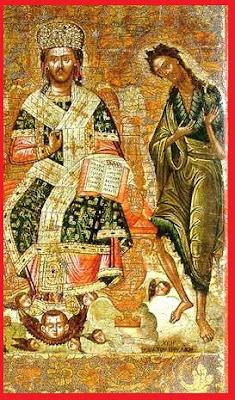 By John Sanidopoulos
The mission of John the Baptist is best summed up in Genesis 24, where we read about the marriage between Isaac and Rebekah. There we read, in summary, how when Abraham was advanced in years, he told his servant to go to his homeland in Nahor and find there a wife for his son Isaac, so that he would not take a wife from among the local Canaanites. Abraham further told his servant that he was to bring the woman who was to be Isaac's wife back to him in Canaan, and not allow Issac to go to Abraham's homeland, and an angel would assist him on his path. If the woman however refused to return back with the servant, then the servant would be free of his oath. The servant therefore took the oath, and set on his journey in search of Isaac's bride, accompanied by ten camels and choice gifts for the bride to be.
When the servant arrived at Nahor, he waited with his camels outside the city; it was toward evening, when the women would go out to the well to draw water. There the servant prayed to God to help him choose the right woman for his master Isaac, and he would know this by approaching a woman for a sip of water; if she offered him a sip of water and his camels also, then he would know it was the right woman. It was then that Rebekah came forward to draw water, who was beautiful in appearance and a virgin. The servant approached her, asked for water for himself, and she in turn gave him water and offered water for his camels. When the camels had finished drinking, "the man took a gold nose-ring weighing a half shekel, and two bracelets for her arms weighing ten gold shekels," and placed them on Rebekah, and asked if he could spend the night in her father's house. After he found out her father was a relative of Abraham his master, he thanked God for leading him on the right path.
At her father's house a table was set for the servant to eat, but he would not eat until he revealed why he had come. After recounting the entire story, Rebekah's father and brother took the matter to be God's will, and allowed Rebekah to go and be the wife of Isaac. The servant in return thanked the Lord for making his journey successful, and gave Rebekah and her household many costly gifts. Soon after they departed for Canaan. There they saw Isaac walking alone in a field, and we read: "And Rebekah looked up, and when she saw Isaac, she slipped quickly from the camel, and said to the servant, 'Who is the man over there, walking in the field to meet us?' The servant said, 'It is my master.' So she took her veil and covered herself." After the servant told Isaac everything Abraham had arranged, he took Rebekah to be his wife, and he loved her.
When we read this story in the context of salvation history, in which all things are fulfilled in Christ, we will see that Abraham in this story is a type of God the Father, while his son Isaac is a type of Christ. Christ was sent by His Father into the world as a Bridegroom to find His bride, the Church, and make her His own. Now the servant of Abraham in this story is a type of John the Baptist, who came to prepare the bride for the Bridegroom. We read in John 1:6-11:

There was a man sent from God whose name was John. He came as a witness to testify concerning that light [Christ], so that through him all might believe. He himself was not the light; he came only as a witness to the light. The true light that gives light to everyone was coming into the world. He was in the world, and though the world was made through him, the world did not recognize him. He came to that which was his own, but his own did not receive him.

And John himself testified in John 1:31, "the reason I came baptizing with water was that he [Christ] might be revealed to Israel." And when Jesus and His disciples were baptizing the people and gaining more followers than John, the followers of John came to him and informed him of this, to which John replied: "A person can receive only what is given them from heaven. You yourselves can testify that I said, ‘I am not the Messiah but am sent ahead of him.’ The bride belongs to the bridegroom. The friend who attends the bridegroom waits and listens for him, and is full of joy when he hears the bridegroom’s voice. That joy is mine, and it is now complete. He must increase; while I must decrease" (Jn. 3:27-29). Thus John reveals that he is friend of the Bridegroom who came to prepare for Him His bride, namely the Church.
After Genesis 24 the servant of Abraham, who was the main character of the chapter, falls into obscurity after he presents Rebekah to Isaac, properly adorned with the gifts of his master for the wedding to take place. So also did John, "the greatest of men born to a woman," fall into obscurity when his mission was completed, having properly prepared the people of Israel for the coming of their Messiah. John had found the bride of his Master, Christ, not at a well, but at the Jordan River, where the people came to be baptized and repent of their sins. And when Christ appeared by Himself at the Jordan and revealed Himself to John as testified by the voice of God the Father and the Holy Spirit in the form of a dove, John, like the servant, told the people that he was not the one they were waiting for, but Christ was "my master." And thus the bride was introduced to her Bridegroom, and the Bridegroom loved her.
John at 11:59:00 AM
Share
‹
›
Home
View web version