The Only Thing New Under the Sun 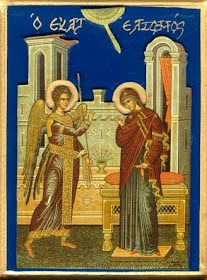 By His Eminence Metropolitan Hierotheos
of Nafpaktos and Agiou Vlasiou
Saint John of Damascus says that Christ is the "only thing new under the sun". Let us examine two points about this.
First, Christ is the only new person in history after the creation of the world. That is, God created the noetic spirits, the angels, then He created the sensible world and lastly man who was the summary of all creation. Since then everything repeats, nothing else is new. The "only thing new under the sun" is the God-man Christ, since the divine nature was united with human nature and the hypostasis of the human nature was the Logos, the Second Person of the Holy Trinity.
The second point is that the way Christ was conceived was something new for humanity. After the fall of Adam and Eve the conception and birth of every person is associated with pleasure and pain. Every woman conceives with pleasure and gives birth with travail and pain, which resulted from the fall.
But the conception and birth of Christ overcame this relationship between pleasure and pain. The Panagia conceived by the Holy Spirit without seed and hence without pleasure, she was pregnant without labor and gave birth to Christ without travail and pain. Of course, later when she was next to the Cross she tasted this pain, because she did not taste it at the birth. However, the conception and birth of Christ without travail and pain is the new thing that appeared among humanity.
This new thing with its two particular expressions can, by proportion, be lived also by a person who is connected with Christ. Christ is the God-man, and people by His power can become deified, to reach theosis, as we see in the lives of the saints. Christ was conceived without causing pleasure and pain to the Panagia and Christians can also overcome, by the energy of Christ and their free synergy, the temptations of pleasure and pain.
If you observe modern society you will find that the majority of people live under the domination of two great beasts, namely pleasure and pain. By pleasure is meant bliss and the entire hedonistic way of life which is enjoyed by modern man, and by pain is meant hurt, disease and death, which they are suffering from.
One scholar writes that psychoanalysis is the fruit of the West in its quest to understand how it is possible for man to experience pleasure, bliss and gratification while at the same time experiencing hurt and pain in life. The complete answer to this question is given by patristic wisdom.
When man was created by God he did not have pleasure and pain, as Saint Maximus the Confessor analyzes, but these were the result of the fall. Since then there exists a relationship between pleasure and pain. Every pleasure invites pain and the attempt of man to overcome the pain invites new pain and so it becomes a vicious cycle.
One example is the inclination of people towards addictive substances - drugs. The young person feels pain from the situation they are facing in their environment, they try to overcome it with temporary pleasure through addictive substances, but this causes new pain, which is why it is a tragedy in his life and he cannot overcome the vicious cycle of pleasure and pain.
The Fathers of the Church indicate the way by which we can overcome the dual relationship between pleasure and pain. Saint Maximus the Confessor teaches than man faces two temptations. One is involuntary and the other is voluntary, since no one wants sickness, pain and death. We must refrain from involuntary temptation and abhor voluntary temptation, but when it comes we should accept it with faith and patience, because this is how voluntary pleasure is healed. Thus the voluntary acceptance with faith of involuntary pain heals voluntary pleasure.
Therefore, the feast of the Annunciation of our Theotokos shows us the incarnation of Christ and the beginning of the divine Economy, because Christ is the "only thing new under the sun". After the incarnation of Christ nothing is new, all is old. Whoever wants to become new must be connected with Christ who "recreates the natives", for this is how we are regenerated and exempted from the vicious cycle of pleasure and pain and are deified.
Let us fervently supplicate the Panagia to give us her blessing.
Source: Ekklesiastiki Paremvasi, "Τό μόνον καινόν υπό τόν ήλιον", March 2009. This is a summary and excerpt from a Homily delivered on March 24, 2009. Translated by John Sanidopoulos.
John at 10:08:00 AM
Share
‹
›
Home
View web version