Metropolitan Kallinikos of Edessa, Pella, and Almopia (+ 1984) Has Been Canonized by the Ecumenical Patriarchate (Brief Biography and Hymns Included) On Tuesday 23 June 2020 the Holy and Sacred Synod of the Ecumenical Patriarchate convened at the Orthodox Center of the Ecumenical Patriarchate in Chambesy, Geneva where they officially numbered among the Saints of the Orthodox Church the ever-memorable Metropolitan Kallinikos of Edessa, Pella, and Almopia (1919-1984). That evening the bells of the parishes throughout the Metropolis of Edessa rang for joy at the announcement. Metropolitan Joel of Edessa went to the tomb of the newly-glorified Saint, where all those present chanted his Apolytikion, Kontakion and Megalynarion composed by Metropolitan Joel himself. His feast day has been established to be celebrated on the 8th of August.
Brief Biography
He was born with the name Demetrios Poulos on 26 January 1919 at the village of Sitaralona in Agrinio to a poor and pious family. He graduated from the Theological School of Athens in 1942, and served as the Metropolis secretary and preacher in Aitolia-Acarnania under Metropolitan Theokletos until 1946. He served in the army from 1946 to 1949. After serving his patriotic duties in the army, he returned to the Metropolis of Aitolia-Acarnania and resumed his work as secretery and preacher. On 23 November 1957 he was tonsured a monk at the Monastery of Myrtia, where he received the name Kallinikos. He was ordained a Deacon and Priest by his brother according to the flesh, Metropolitan Konstantinos of Didymoteicho in the year 1957. On 25 June 1967 he was enthroned as the Metropolitan of Edessa in the Church of Saint Dionysios the Areopagite in Athens. After a seven-month illness he reposed on 7 August 1984 in Athens. During his hospitalization in England he had left to the medical staff and the people who served him or visited him a sense of a holy man. 29 hierarchs were at his funeral, as well as numerous clergy and a large crowd of faithful. He was buried in the Public Cemetery of Edessa, because he wanted to be close to his people that he loved and served in his life.
In his last will and testament he wrote: "I have no real estate. I have no money. If only a few thousand drachmas are found they are to be deposited in the General Philoptochos Fund of the Holy Metropolis ... May the mercy of the Lord accompany me during my departure from this vain world."
Metropolitan Kallinikos was an ascetic bishop, a great ecclesiastical figure, a blessed and charismatic leader, and a transparently honest man, whose life was theology in practice. A crucified and resurrected hierarch, he labored for the sake of his flock and sacrificed himself for the glory of God. With his noble love, he gave us the certainty of true life. Being transfigured, he experienced triumph over death and was an adornment to Christ’s Church. 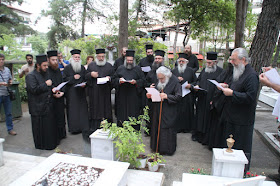 Metropolitan Kallinikos' ecclesiastical way of thinking, his ascetical ethos, his missionary zeal, his devotion to God and the Church, his regenerating word and preaching, his entire pastoral ministry, which he pursued ‘in fear and trembling’, his love for God and other people, the way in which he faced his illness, and his complete self-abandonment to God’s providence, arouse our admiration. The words that he said shortly before he died, "I am a sinful bishop, but I love God and the Church," show his spiritual state.
His Eminence Metropolitan Hierotheos of Nafpaktos, as a spiritual child and the person closest to the hierarch of blessed memory for a period of fifteen years, testifies in his writings that he was a saintly bishop, whose presence remains alive even after his death. Many bishops, clergy and laypeople bare witness both orally and in writing to his holiness. The demons that he cast out by his prayers and his miraculous interventions to cure sick people after his death make it clear that God has glorified him.
He entered the priesthood at a mature age, conscious of his exalted mission. He especially loved the monastic and hesychastic life, and he was an ascetic Bishop. His sermon on his consecration as a Bishop and his address at his enthronement are described as patristic discourses expressing profound feelings of gratitude and love for God.
His concern and great love for the flock that God had entrusted to him was exceptional: his aim was to make his Metropolis part of the Kingdom of God. The Encyclicals that he sent reveal his personal interest in the instruction of priests as well as laypeople. He was extremely attentive about ordinations. He took a personal interest in the progress of priests and their training. He did not act independently, and knew that he would have to answer to God for whatever he did. His many different pastoral activities and his travels around the Metropolis show us his great care and sense of responsibility for every parish. 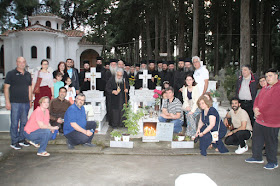 In his province he had the blessed habit of founding new churches dedicated to saints who are not often honored (Evangelist Matthew, Saint Dorotheos, St. Alexios the Man of God, etc.). As a lover of monasticism he often visited Mount Athos, where he performed a number of ordinations. To newly-married couples he would always give a copy of the New Testament with his blessing. His philanthropy always left him penniless, to the extent that when he was ordained a Metropolitan he could not afford any of his vestments, so he had to be given some by his brother who was also a Metropolitan. He supported many young people with an authentic and sincere priestly inclination, was a tireless minister and often visited even the most remote village of his province. During his visits, he treated young children with love and respect as if they were adults and encouraged them in their ministry and participation in the liturgical life.
What establishes the Metropolitan Kallinikos as truly a man of God and reveals his wealth of virtues, however, is the way in which he faced the various difficulties in his life and his illness. Although he sacrificed himself wholly for his flock every day, he suffered unjust and slanderous attacks. He faced these and his illness without murmuring or self-pity, without complaints or objections, but with faith in God and great patience, having abandoned himself to God’s providence. His self-condemnation was incomprehensible to worldly reasoning. On many occasions in his life he had the gift of remaining silent. Watchfulness and the remembrance of death, which were particularly evident during the period of his illness, distinguished him throughout his life. His gratitude was boundless: he was infinitely grateful, and he thanked and praised God for everything.
Metropolitan Hierotheos of Nafpaktos writes about him:
"God found me worthy to live for fifteen years under the same roof, in the Diocese, with a Bishop who had all the criteria and conditions of holiness. This is the blessed Metropolitan of Edessa, Pella and Almopia Kallinikos. The same testimony is given by his successor to the throne of Edessa, the current Metropolitan Joel, who knew him personally, since we were both his Preachers, but this is also confirmed by the members of his flock, who knew him intimately. After his death, I wrote three books titled Testimony of Life (1985), Jewel of the Church (1998), Kallinikos, Metropolitan of Edessa, a Venerable Figure (2015). In addition, from time to time I wrote various articles that present him as an amazing figure. I met him as a high school student in Agrinio, when he was Chancellor of the Holy Metropolis and I was impressed by his ascetic appearance, his monastic simplicity, his most-sweet words, his whole physiognomy. He was coming to the Christian Boarding School where I lived, and we all admired the careful, pleasant, simple clergyman." 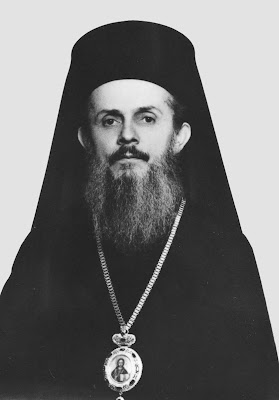 Verses
We honor Kallinikos of Edessa,
A holy Spirit-bearing Bishop.
Apolytikion in the First Tone
Shepherd of Edessa, most-auspicious Chief Sacrificer, and the luminous pride, of the entire Church, let us the faithful honor Kallinikos, the guide of clergy and laity, on whose behalf he ceaselessly intercedes, those who always cry out: Glory to Christ Who glorified you, glory to Him Who showed you forth, glory to Him Who works through you all manner of healings.
Kontakion in the Second Tone
Imitator of the Savior Kallinikos, and the excellent shepherd of Edessa, and the dignity of the Church everywhere, of him let all who love the saints sing hymns, for he has shown to be our support.
Megalynarion
Rejoice divine offspring of Aitolia, and wondrous Chief Sacrificer of Edessa, rejoice the boast and glory of the Church, shepherd Kallinikos, the first-fruit.