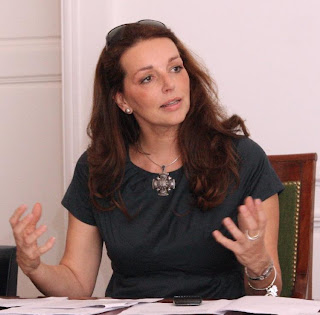 February 26, 2013
Cihan
Valerie Boyer, who drafted a controversial Armenian genocide bill, has said that she would never go to Turkey again over security fears. Speaking to Cihan News Agency (Cihan) in a special interview, she stated that she presented the bill that the French Constitutional Council rejected last year to the National Assembly; and suggested a proposal to establish a commission of inquiry for the Council.
The bill drafted by Boyer, which would punish those who deny the 1915 mass killing of Armenians was genocide, was approved by the French National Assembly last year.
The French Union for a Popular Movement (UMP) deputy Valerie Boyer indicated that she submitted two new bills to the Parliament.
Claiming that she was affronted and threatened by the Turkish government, Boyer said that she saw many insulting videos that contain profanity on YouTube.
“Fortunately, I do not understand Turkish. At the same time, I have faced multiple threats about me and my family in French as well. I had to live under police escort for awhile,” indicated Boyer; stressing that these threats cannot make her to take a step back.
“I am the Vice President of the Armenia-France Friendship group in Parliament. I will continue my struggle about punishing the denial of the Armenian genocide,” she said.
Valerie Boyer noted that “I have been to Turkey before, and I know there would be no life-security for me there. Why would I risk my and my family’s life,” adding that she does not want to take any step towards provocation.
Stating that she is not going to Turkey, even if the government gives an assurance of safety, the author of the genocide bill said, “Hrant Dink was not killed by the government; but we still do not know who the murderer is.” Besides all the threats and insults she received, Valerie Boyer said that there are also supporting messages. “In Turkey, there are people who still believe in human rights,” continued Boyer.
“Hollande used to think like Sarkozy”
Expressing her views on the new drafted genocide bill, she said “I have not changed my mind. I did what I had to do. The rest depends on whether or not the President François Hollande keeps his side of the bargain." Valerie Boyer has also reminded that before the elections, Hollande had thought the same as Nicolas Sarkozy.
Boyer said there are not tens of ways for solving the issue and apart from the bills she presented, a third way is not existed. “François Hollande may be working on a third way. As of now, all committees related to the subject are at work.”
“I can make a new offer everyday”
Talking about the bill that was approved by the Parliament and the Senate, the Constitutional Council rescinded it for an interesting reason. Boyer said: “We cannot go against it. However, there is no reason not to suggest a new proposal.” She added that more than a hundred deputies support her and she also have enough support for the third bill as well. “Everyday, I can make a new offer,” Boyer said.
Arguing that the law proposals have nothing to do with Turkey, she stated that the punishment is related to French citizens and people who live in France.
“In Azerbaijan, I became the unwanted person”
Refusing to comment on the Khojaly Massacre, Valerie Boyer has claimed that, “Karabakh has continued its existence despite Azerbaijan.” She blamed Azerbaijan for misinforming world public opinion with the power of petrol and money. Just because she visited Karabakh, she added that she became the unwanted person in Azerbaijan. On the other hand, Boyer reminded that Ramil Safarov, who was in prison for killing an Armenian soldier in Hungary, was welcomed like a hero in Azerbaijan, and asked, “How could you believe a country which considers a murderer as a hero.”
“Constantinople used to be a part of Europe”
French deputy Boyer indicated that she is definetely against Turkey’s European Union (EU) membership. She also said that Turkey is not a part of the EU, neither culturally nor geographically. Underlining that countries in the EU are linked each other with geographical, cultural, political and historical ties, Boyer indicated that “Europe’s part was Constantinople.”
Saying the demographic structure of Turkey will make the EU unstable, Valerie Boyer pointed out that as a last country to join, Turkey will be the most populated country in Europe.
Valerie Boyer also indicated that the biggest obstacle for Turkey’s membership is the issues of Cyprus and the Armenian massacare. “We cannot accept a country, which occupies a country that is a part of the EU, as a member of the union,” she said.
“Human and Women's rights are one of the core elements of the EU. If you want to join a group, you have to follow its rules,” continued Valerie Boyer. Saying that it is impossible that Turkey can become a member without resolving past issues, Boyer added that she supports the idea of privileged partnership which was suggested by Nicolas Sarkozy.
Video: Interview With Valerie Boyer
John at 3:34:00 PM
Share
‹
›
Home
View web version