Greeks Skimp on Weddings & Funerals Due to Crisis 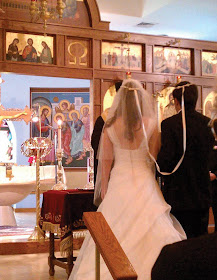 Deborah Kyvrikosaios
February 21, 2013
Reuters
Fewer Greeks are walking down the aisle as their country's deep economic crisis takes a toll on their famously lavish weddings, an age-old ritual that has become an unbearable cost for those struggling to make ends meet.
Religious wedding ceremonies in bell tower chapels overflowing with flowers, meter-high candles and candy wrapped in tulle, are a deeply ingrained tradition in Greece, where the powerful Orthodox Church plays an influential role in society.
But as recession slides into its sixth year, unemployment rises and poverty spreads, a church wedding is a luxury many couples can no longer afford.
For 28-year-old bride Nafsika Koutrokoi, who works at a butcher shop, fulfilling her dream of marrying her fiancé, a cable technician, in church was a difficult decision that required huge sacrifices.
"Things are quite tough right now," she said after the wedding. "We cut down on many things, from invitations to the reception, on everything."
The number of Greek couples who tied the knot in church tumbled to 28,000 in 2011, two years into Europe's debt crisis, compared to the pre-crisis level of 40,000 in 2008, according to the country's statistic service ELSTAT.
In contrast, the number of low-key civil unions skyrocketed to 26,000 in 2011 from about 8,000 a decade earlier.
As Greece's crisis deepens and successive governments are forced to impose wage cuts and tax rises in exchange for the foreign aid keeping the economy afloat, the wedding industry's countless shops and planners are also feeling the pinch.
"They want whatever is cheapest, which often is not possible because the cost of everything is rising," said wedding shop owner Anastasia Theophanopoulou, whose family business has sold wedding supplies for decades. "There is a drastic drop."
The downturn has also had an unexpected effect on another ceremony revered by many Greeks - funerals.
With more and more Greeks having trouble paying for funerals, municipal authorities in Athens have reduced the cost of burial in the capital's cemeteries.
"There was always money for the deceased, but now people are in a very bad state," said Athens City Councillor Nikos Kokkinos, who is responsible for cemeteries.
Some Greeks do not collect their dead loved ones from the hospital to avoid having to pay for the funeral. Others can no longer afford a traditional marble tombstone and so leave plots as simple dirt mounds overgrown by weeds, a cemetery official said.
Funeral home director Vassilis Tranou has been forced to lower prices at his family-run business and sometimes will do a funeral - which costs at least 1,500 euros - for free.
"People don't have the money anymore or they don't spend like they used to, and Greeks are usually people who take great care with the people they have lost," Tranou said.
"It makes your hair stand on end," he said, recounting the story of a man who was only able to bury his mother by selling a family heirloom of four gold coins.
John at 3:03:00 PM
Share
‹
›
Home
View web version