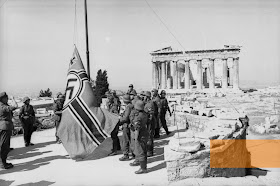 People who risked their lives to save Greek Jews from Nazi persecution during WWII were honored in a special event that took place on 25 June 2012, hosted by the city of Veria, in northern Greece, in cooperation with the embassy of Israel in Greece.
Giorgos and Panagiota Lanaras and Fr. Nestoras Karamitsopoulos posthumously received the title of “Righteous among the Nations” for rescuing Greek Jew Yosef Danielli, his wife Buena and their 10 children from the Nazi occupiers. The awards were received by the Lanaras and Karamitsopoulos families. Yosef’s son, Shimon Danielli, now in his 80s, traveled to Veria from Israel especially for the event.
Shimon Danielli was only 13-years-old in 1942 when he and his parents and nine siblings sought refuge in the home of Giorgos and Panagiota Lanaras in the village of Sykia. The village protected 50 Greek-Jews, and when the Nazis came they questioned Fr. Nestoras Karamitsopoulos on their whereabouts. He refused to give them up. The Nazi's proceeded to search the homes, and in eight houses they found Jews. The Nazi's proceeded to burn those houses down and cut off the beard of the priest and tortured him. The Danielli family survived and eventually made it back to their home in Barbouta, yet they sadly learned that 450 fellow residents were killed in the ovens of the concentration camps.
Shimon Danielli has visited his home town often over the years, and fondly remembers his childhood: "I was young when the Germans came and spread death, but I always maintain gratitude and love for our three heroes."
The honorees received a diploma and medal from Yad Vashem, the Institute and Museum established in Jerusalem by the State of Israel to perpetuate the memory of the six million Jewish victims of the Holocaust. The names of the “righteous” are engraved on a plaque at the premises of the museum in a ceremony held in Jerusalem.
Roughly 300 Greek citizens have been honored by Yad Vashem, among them, the late Archbishop of Greece Damaskinos, the chief of Greek Police during the Nazi occupation Angelos Evert, the late Metropolitans of Zakynthos and Dimitriada Chrysostomos and Ioakim, respectively, and the former mayor of the island of Zakynthos Loukas Karrer.
John at 9:24:00 AM
Share
‹
›
Home
View web version