Saint Cyril of Chelma Hill, Enlightener of the Chudian People (+ 1368)

Saint Cyril of Chelma Hill (Chelmogorsky), Enlightener of the Chudian People, was born in the city of White Lake in September of 1285. He was tonsured at the monastery of Saint Anthony the Roman in Novgorod, where for six years he passed through various obediences. Then, after wandering through the wilderness for three years, he settled in a wild region of Kargopolsk. And here, by a command from on high, he chose Chelma Hill for his constant abode. 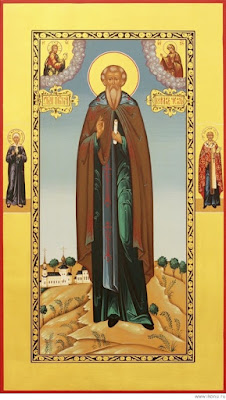 He spent the first winter in a cave, then built a wooden cell and a chapel. Many of the afflicted from the Chud people came to see Saint Cyril, whose luminous ascetic life and kindly preaching moved many to accept holy Baptism. 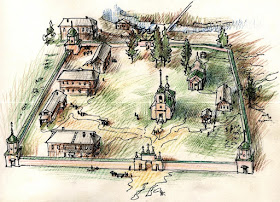 Toward the end of his life, Saint Cyril established a monastery and church in honor of the Theophany of the Lord. The monk dwelt upon Chelma Hill for fifty-two years, and died at the advanced age of 82 on December 8, 1367. 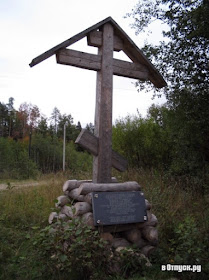 Ten years after the death of Saint Cyril, in 1378, the Cyril-Chelmogorsky Monastery was founded by Hieromonk Arseny. Today the monastery lies in ruins. In 2005, Bishop Tikhon of Arkhangelsk and Kholmogorsky consecrated a cross near the ruins of the former monastery in memory of Saint Cyril of Chelmogorsky. The inhabitants of the villages nearby to the monastery hold in veneration the fir tree and the cave of Saint Cyril. 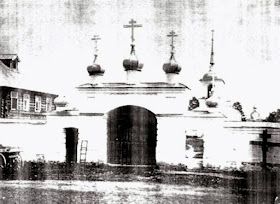