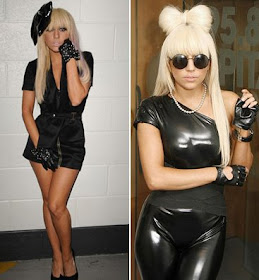 [Lady Gaga is currently one of the most popular female pop stars in America today known not only for her pop hits, but also for her skimpy outfits. Her outfits are not only skimpy on the stage, but off the stage as well. This has caused her to be fined by police for public indecency.

On her recent trip to Moscow, for some reason she decided to visit the Russian Orthodox Cathedral of Saint Basil. Anyone familiar with Orthodox churches in Russian knows that they have strict dress codes to enter these places that require a certain decency. In Greece it is the same and even I as a male have been prohibited from entering certain places for wearing shorts into a church while visiting as a tourist. Which is why I was not surprised to hear that Lady Gaga was almost arrested when she entered the Cathedral in indecent leather attire. -J.S.] 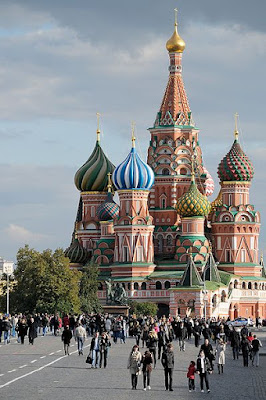 "They tried to arrest me in Russia, for leather at St. Basil's. But all is calm in the red square, as I leave the east Parisbound." -Lady GaGa

Lady Gaga was almost arrested during a trip to Russia – because she was wearing leather.

The ‘Poker Face’ singer was approached by officers when she visited St. Basil's Cathedral, in Moscow, over her choice of outfit.

She wrote on her Twitter page at the weekend: “They tried to arrest me in Russia, for leather at St. Basil's. But all is calm in the red square, as I leave the east Parisbound. (sic)”

The 23-year-old pop star is well known for her skimpy outfits, and is regularly seen wearing just underwear on evenings out.

She has previously admitted her wacky fashion sense has caused her problems with the law, explaining a Chicago policeman once took exception to her tiny shorts.

She previously revealed: "I was outside the Lollapalooza festival in Chicago and this policeman came up and told me my hotpants were too short. They weren't really pants at all, but he got upset and I got a citation. All people will have seen is this half-naked girl on the street yelling, 'It's fashion! I'm an artist!'"

Below is one of the more interesting Lady Gaga interviews