The Tomb of Lazarus 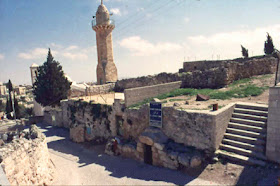 [Between 1948 and 1953 excavations lead to the uncovering of ancient Bethany and with it the various sites of Christian devotion from Roman times. The website here details this history together with pictures. - J.S.]

Like most Jewish tombs of old, that of Lazarus was composed of a vestibule and a burial chamber. Quarried out of the soft rock, the tomb was most likely faced during the Byzantine period with stone or marble-work. In its present state, however, with the exception of the entrance, the tomb shows traces of changes and additions made during the Middle Ages. Since the sixteenth century, the entry to the tomb has been made not from the east but from the north, outside the mosque. A flight of 24 steps leads down to the vestibule, 3,35 m. long, 2,20 wide. The east wall was once pierced by the original entrance to the tomb but this is now walled up. Three steps connect the vestibule with the inner chamber which is a little more than two metres in size. It contains three funerary niches (arcosolia), now mostly hidden by a facing of stonework. One tradition places the tomb of Lazarus to the right of the entrance which was formerly closed by a horizontal stone. According to pilgrims of old, it was in this vestibule that Jesus was standing when he called Lazarus from the grave. 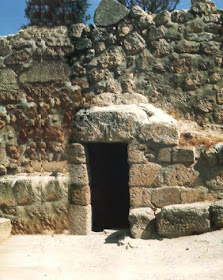 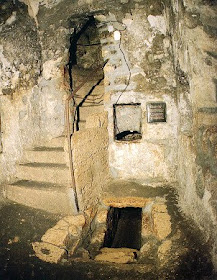 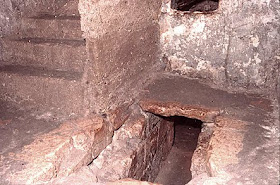