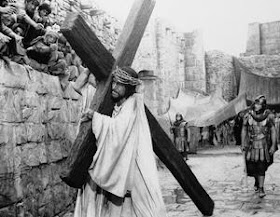 Jesus On Screen: Movies That Tell Christ’s Story Have Always Been Popular

Filmmakers just can’t resist going back to tell Jesus’ tale over and over.

The Bible has it all — murder, sex, lies, wars, plagues, redemption, forgiveness, pharaohs, love, hate, sibling rivalry. And you don’t have to pay royalties.

The New Testament gives us one of the most charismatic, fascinating figures in history. Whether or not you believe Jesus Christ’s story, Hollywood banks on the assumption that the tale of a man who turns the philosophies of various cultures upside down in just a few years — and then sacrifices his own life so that others may reap the benefits — is interesting.

The challenge, of course, is to find something new to say, or at least find a different way to tell the story that’s been told millions of times all over the world. Some people so revere the story of Jesus that anything less than a straightforward, worshipful retelling courts protests. Others, meanwhile, periodically desire a new way to hear the story because they’ve heard it so often.

So with Easter right around the corner, these are among the more prominent films that tell the story of Jesus. Most, if not all, should be available at your local video store, digital movie services or through the mail.

• “JESUS CHRIST SUPERSTAR” is the 1973 film version of the Andrew Lloyd Weber stage musical about the last weeks of Jesus’ life. The best-known song is “I Don’t Know How To Love Him,” a pop hit for the woman who played Mary Magdalene on stage and in the film, Yvonne Elliman (who later had a No. 1 single with “If I Can’t Have You”). True story: Ted Neeley, star of the film, plays Jesus in a touring production of the musical to this day.

• “GODSPELL” is the other 1973 film version of a popular stage musical about the end of Jesus’ life, with Victor Garber (“Alias”) as Jesus. The best-known song is “Day By Day,” which became a pop hit. The film version looks extremely dated now — hippies running around New York City — but the crucifixion scene is still moving.

• “THE PASSION OF THE CHRIST” seems so obvious now that it has earned a gajillion dollars and showed that even non-evangelicals will turn out for a Christian movie — if it is of high quality (a stumbling block for many “Christian films” operating with tiny budgets and volunteer casts and crews). But you may remember before the premiere that everyone thought director Mel Gibson was nuts for making an extremely violent film about Jesus’ crucifixion.

• Among films that postulate that Jesus and Mary Magdalene were more than just friends, we have “THE LAST TEMPTATION OF CHRIST” (1988), Martin Scorsese’s take on the life of Jesus (Willem Dafoe) as more man than deity. Boy howdy, was there controversy at the time.

“THE DA VINCI CODE” (2006) doesn’t feature Jesus as a character, but he was an integral part of the story. The film adaptation of Dan Brown’s novel is about a group trying to protect a secret that could absolutely rock Christianity: Jesus and Mary Magdalene had a child whose descendants are still around today. Boy howdy, was there controversy at the time.

• “JESUS OF NAZARETH” (1977) and “JESUS” (2000) are both television miniseries about Jesus’ life. The “Nazareth” cast was loaded with stars — Christopher Plummer, James Earl Jones, Laurence Olivier, Anthony Quinn, Rod Steiger, Anne Bancroft ... the list goes on and on. Some people criticized the 2000 “Jesus” because it depicts Christ (“Law & Order’s” Jeremy Sisto) as someone who enjoys dancing and wine. But other viewers felt the miniseries humanized him.

• Among the more reverential films is “THE GREATEST STORY EVER TOLD,” a 1965 film starring Max von Sydow as Jesus that’s so loaded with stars that John Wayne’s character doesn’t even merit a name. It clocks in at more than three hours, so get comfortable. Another reverential adaptation is 1961’s “KING OF KINGS,” which hits most of the better-known stories of Jesus’ life and features unmistakable (and uncredited) narration by Orson Welles.

• “BEN-HUR,” the 1959 film that defines “epic,” stars Charlton Heston as a falsely imprisoned Jew named Judah Ben-Hur who seeks revenge on those who destroyed his family. But after encountering Jesus, Ben-Hur learns a thing or two about redemption. Clocking in at more than 31/2 hours, schedule yourself a break to eat, use the restroom, do your taxes ...

• “LIFE OF BRIAN” (1979) is the extremely irreverent take on the Jesus story as told by Monty Python’s Flying Circus (seriously, if you’re easily offended, avoid this movie). An everyday guy who was born on Christmas in the stable next door is mistaken for a prophet, and no matter how hard he tries, he can’t convince anyone that he is not the Messiah. Python geeks cry with laughter at “Blessed are the cheesemakers,” the impromptu lesson in Latin as Brian tries his hand at graffiti, and the cheerful closing production number “Always Look on the Bright Side of Life” ... during a mass crucifixion.

Other films with religious themes

• The “Oh, God” movies: George Burns starred as a golf-sweater-wearing, plain-speaking God who asks everyday people to tell his story. The original in 1977 starred John Denver as an assistant grocery store manager who gives up pretty much everything to follow through on God’s request. The 1980 sequel made God’s messenger a young girl. And the 1984 feature that completed the trilogy had God battling the devil over the soul of a musician (Ted Wass, later the dad on “Blossom”) who really, really, really, really wants to be a rock star.

• “Dear God,” starring Greg Kinnear and Tim Conway, is about postal employees who answer letters to God languishing in the dead letter office.

• “The Ten Commandments,” the 1956 film about Moses that turned Charlton Heston into the Voice of God.

• “Raiders of the Lost Ark” (1981) introduced us to Indiana Jones as the archeologist/adventurer retrieving the lost Ark of the Covenant from the Nazis.
John at 2:46:00 PM
Share
‹
›
Home
View web version