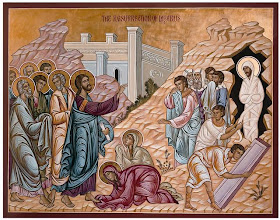 By Metropolitan Anthony Khrapovitsky
Have you ever noticed, dear reader, that in all of Christ’s Parables there occurs but one proper name? If you have noticed, have you ever tried to ascertain why our Lord calls only this Lazarus by name, while even his rival during his earthly sojourn remains under the title of the Rich Man?... Perhaps we would sooner find what we seek, were we to attempt to make a little clearer the individual ideas expressed in the Lord’s parable. Is everything in it clear?

Is our heart reconciled to Abraham’s hope-shattering reply to the Rich Man who was bemoaning his brethren: "If they hear not Moses and the Prophets, neither will they be persuaded, though one rose from the dead?” (Luke 16:31). These stern words, by the very force of their implications, probably troubled many of the Lord’s followers, and to this day continue to trouble many who read the Gospel, for they might seem to be an exaggeration until they are confirmed by actual events. And in fact, they were confirmed.

Not Lazarus the pauper of the parable, but another Lazarus, the friend of Christ, known to all the Jews, plainly rose from the dead, before the eyes of a large crowd of people, having spent four days as an unbreathing, malodorous corpse. “Then many of the Jews which came to Mary, and had seen the things which Jesus did, believed on Him.”

Many, but not all. “But some of them went their ways to the Pharisees, and told them what things Jesus had done” (John 11:45, 46). They assembled, and not only were not mollified in their stubborn unbelief, or more accurately, their disobedience to the truth, but also, in accordance with the voiced intent of Caiaphas, determined to kill the Slayer of Death; yet even this did not seem enough for them. “But the chief priests consulted that they might put Lazarus also to death; because that by reason of him many of the Jews went away, and believed on Jesus” (John 12: 10-11). Note that in their decision there is neither a denial of the miracle, nor an indication of any guilt on the part of those they had condemned: an unjust execution, decided beforehand, was their sole means of keeping the people in unbelief, and they determined to employ such means.

The words which the Lord put on the lips of Abraham concerning the extent of man’s hard-heartedness were thus proved true in all their terrible accuracy: whoever does not want to listen to Moses and the Prophets will not believe one who has risen from the dead. The Apostle John does not cite the parable of the Rich Man and Lazarus, but somewhat earlier recalls Christ’s words which link the Jews’ unbelief in His miracles to disobedience to Moses and secret unbelief in his law, which proceed from their moral callousness and the seeking of their own, not God’s, glory. “There is one that accuseth you, even Moses, in whom ye trust. For had ye believed Moses, ye would have believed Me: for he wrote of Me. But if ye believe not his writings, how shall ye believe My words?” (John 5:45-47).