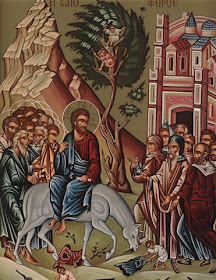 I received the following question which I thought needed to be clarified in a more public forum, due to certain canonical confusions.

John, I wanted to ask you about Palm Sunday and the Annunciation. In particular the rule for fasting regarding fish during Great Lent. A few years back there was a debate between my father and our parish priest because the Pedalion states that fish can only be eaten on the Annunciation [during Great Lent]. When the Annunciation fell during Holy Week, fish could be eaten on Palm Sunday. Together, we ended up looking at three different Pedalion [editions]: my dads is an edition from the mid-1930's in Greek, Fathers is from around 1990 in English, and another priests from the mid-1800's in Greek.

Each was the same in the rule for fish during Great Lent. Fish is only allowed on the Annunciation. Interestingly enough, in a footnote in the bottom, each edition said that any deviation from that made one a servant of the stomach, "δουλοσ τησ κοιλιασ". After all of the referencing and cross referencing, they said that over the generations they determined that people must have become accustomed to fish on Palm Sunday because on the occasion that the Annunciation fell during Holy Week, fish was eaten on Palm Sunday. The following year, having remembered they ate fish on Palm Sunday the previous year, they did so again then and also on the Annunciation which came earlier that next year, prior to Holy Week. This lead to the "new" practice of fish on both days. Are you able to tell me if you can confirm any of the this?

They did tell me that the Pedalion was compromised at one point by an individual who was trusted to take it to be published some generations ago. The one Father thought this could explain the discrepancy, perhaps the rule was fish on both days prior to this compromise. Coincidentally, the Father with the older Pedalion said that Bishops have been known to give a dispensation, so long as it is not done publicly to not scandalize others who may know differently.

I assume the information you noted which is contained in the footnotes of the Pedalion are the ones by St Nikodemos the Hagiorite. Whatever the case is, it is interesting and worth considering the "evolution" hypothesis which you explained as to how Palm Sunday became a day on which fish is eaten, but even St. Nikodemos would have to admit it is speculation. This hypothesis assumes that the practice of the entire Church and the educated clergy were compromised just by a few who confused, what seems to be clear from the canons, an important tradition. However, I'm not even sure if it was an ancient tradition that if the Annunciation fell during Holy Week that fish was eaten on Palm Sunday instead, though in other years they had abstained on Palm Sunday. There is no evidence for this, as far as I know. Ultimately we do not know the origins of eating fish on Palm Sunday, and personally I do not think it has anything to do with the Annunciation.

According to Holy Tradition, there are seven Great Feasts of the Lord:

If any of these days fall on a fast day, then fish is permitted (or the fast could be eliminated altogether), except for the Elevation of the Holy Cross which is a strict fast day. The same is true with the five Great Feasts of the Theotokos, among which is the Annunciation. When a Great Feast of the Theotokos falls on a fasting day, the fast is relaxed to permit fish, wine, and oil (Exception: when Annunciation falls during Holy Week, wine and oil (but not fish) are permitted; when Annunciation falls on Holy Friday or Holy Saturday, wine [but not oil or fish] are permitted).

Lastly, it is hard to say what, if any, compromises there are in the Pedalion, and a study on this should be made. Some say it was done by the Venetian publishers, while English speakers may accuse the followers of Apostolos Makrakis, who translated The Rudder, of compromising the texts. I doubt this is the case on this issue however.
John at 4:13:00 PM
Share
‹
›
Home
View web version