Divine Grace Drove the Apostles Crazy, in a Good Way, and Excited Them (St. Porphyrios of Kavsokalyva) 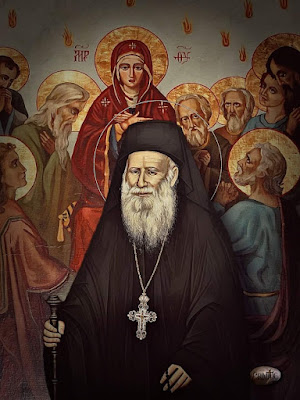 Saint Porphyrios of Kavsokalyva, speaking about Pentecost and the outpouring of the Holy Spirit on the Apostles, said:
On Pentecost, the grace of God was poured out not only on the apostles, but on all the people around them. It affected the believers and the unbelievers. What does Acts say? While the Apostle Peter was speaking his own language, his language was being processed in the minds of the listeners at that time.

In a secret way the Holy Spirit made them understand his words in their language, secretly, without being noticed. These miracles are done by the influence of the Holy Spirit.

For example, the word "home" to someone who knew French would be heard as "la maison". It was a kind of clairvoyance; they heard their own language. The sound was heard in the ear, but inwardly, with the illumination of God, the words were heard in their language.

The Fathers of the Church do not reveal this interpretation of Pentecost very openly, they are afraid of distortion. The same is true of the Apocalypse of John. The ignorant cannot understand the meaning of the mystery of God.

Below he says: "And every soul was filled with fear" (Acts 2:43). This "fear" was not fear. It was something else, something foreign, something incomprehensible, something we cannot explain.

It was awe, it was fulfillment, it was grace. It was being filled with divine grace. At Pentecost, people suddenly found themselves in such a state of deification that they lost it.

Thus, when divine grace overshadowed them, it drove them all crazy - in a good way - it excited them. This has made a big impression on me. It was what I sometimes call a "state of being". It was excitement. A state of spiritual madness.
Source: Γέροντος Πορφυρίου, Βίος και Λόγοι, εκδ. Ι.Μ. Χρυσοπηγής, σελ. 207-209. Translation by John Sanidopoulos.
John at 11:43:00 AM
Share
‹
›
Home
View web version