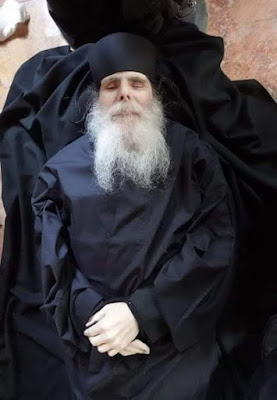 Metropolitan Athanasios of Limassol was the first Orthodox Christian Frank Atwood got in contact with in the mid-1990's while he was prison, and the Metropolitan was at that time not a Metropolitan but an abbot of a monastery in Cyprus and former monk of Mount Athos. It was during his prison studies of the blending of Christianity and Oriental religions that Frank came upon and read the book The Mountain of Silence: A Search for Orthodox Spirituality by Kyriacos Markides. In this book, Metropolitan Athanasios (under the pseudonym Father Maximos) gives a profound account of the true nature of Orthodox spirituality from an Athonite perspective, and this moved Frank to get in contact with him. A few years later, in 2000, Frank was baptized with the name Anthony.

Below is a translation of a transcript from a recent audio recording in which Metropolitan Athanasios was asked about the recent execution of Frank Atwood, and he replied as follows:

It was a moving experience that we all experienced and I see how a man, who spent his youth in delinquency and in many illegalities and evils, ended up in prison, worthy of his deeds.

But his death sentence was not fair because he had not committed the murder for which he was convicted. And as he describes in his book that he wrote - and as he told me when I met him - he really had a very difficult life. But in prison he slowly found God, he found himself, he found the Orthodox Church. In a wonderful way we got to communicate together. Then I took care of him so that Father Paisios was sent there and baptized him and then took on his spiritual protection and responsibility. He communed frequently, lived spiritually, studied Orthodox Theology in depth, and was a man who experienced the cause of his death daily.

When the time came for him to be executed, he with a lot of patience, with very much a lot of patience - the policemen who were close to him, confess themselves, that for the first time they saw a man having so much peace at the time of his death and he even pointed out the vein because they could not find it (the doctors could not find the vein to give him the medicine and he helped them find it) - he was smiling. He was smiling at everyone, at his wife. After receiving the monastic angelic schema the day before and being named Ephraim the monk, he communed and thus left this world saying his last words:

"May God forgive us all."

He forgave the people who insulted him because until his last moment some people went there and said harsh and difficult to hear words to him. And his last letter, which he sent us, was very moving for what he was saying inside it. He did not criticize anyone. He did not blame anyone. He saw them all with a justification and that is something very important. And thank God, he reposed. I mean it became a cause of great benefit to so many people. Many people watched his journey these days and received courage, bravery, patience, not to despair, not to be disappointed. And do not disappoint anyone! He was an example like the Good Thief. Frank was a thief, Anthony became an Orthodox and Ephraim became a monk. These are all examples of God's love and God's mercy and the good disposition of Anthony, of course.

It is a fact that Father Ephraim, Anthony, became a great missionary  and he did it without realizing it and without wanting to. A missionary who testifies to us the love of God and how God makes man from a thief and He makes him a Saint! He was a difficult child, who lived a very difficult life full of disorder, beatings, robberies, vices. Then he went to prison and there he did many evils at first but then his heart broke, he accepted God and became a real evangelist and God found him worthy to reach these great measures of virtue. To be forgiving. To justify the people who hated him and cursed him and said maliciously to him, "You deserve it! It's time to die! Let this be a lesson to you for the things you did!" (All this despite the fact that he did not do what they accused him of. He did other things, but not these).

And he faced them with a lot of forbearance. And it is tragic that even after his death there are people who condemn him - and they condemn us too - and say harsh and difficult to hear words.

Do we not know that God is love and measures things differently!

We must not say harsh words about our brothers.

And "It is God who justifies; who is to condemn?"

If God forgives man, who are we that we will not forgive?

That is why we must be careful not to say heavy and difficult to hear words because we will find all this before us, both in our life and in the time of judgment. Whatever we condemn, we will suffer and we will find it before us in our life. Do not condemn anyone. Do not condemn. God removed from us judgment and condemnation because we do not know the human hearts of others.

Of course we are sad and we are hurting and we cannot blame anyone, not even the relatives of the little girl who was killed, like Anthony writes in his last letter, "I'm sorry that these parents are in pain and believe that I did it" and since they believed it in some way he justified that they are in pain.

But still he did not do this thing himself! But even if he did, by killing him do you bring your child back? Are you justified? You are not justified. The pain is great, we understand. It is a loss. It is a fact that cannot be undone.

But we do not cure evil with another evil. We heal evil with love, with forgiveness, with our lack of remembrance of wrongs.

And as Anthony said in his last words before he died:

"May God forgive us all."

That says it all.