An Image of the Greatness of John the Forerunner (St. Theodore the Studite) 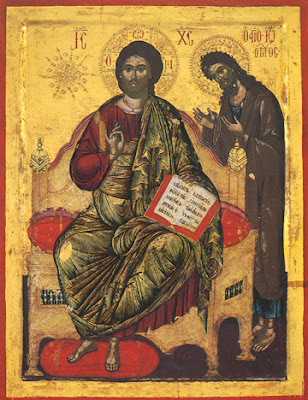 By St. Theodore the Studite
Therefore, it seems to me appropriate to represent the greatness of the Forerunner in the following image. Just as an ordinary king, leaving the royal chambers, has as his predecessors lictors and mace-bearers, and then hypats, iparchs and brigadiers, and then some high dignitary, behind whom the king himself immediately appears, shining with gold and precious stones: so should one think about the true and the only universal King, Christ our Lord. For He, who was to enter into the universe with flesh, was preceded by the patriarchs - Abraham, Isaac, Jacob - then the God-seer Moses, Aaron and Samuel, and the whole chorus of the prophets; finally, John appeared, and immediately after him the Lord Christ, about whom John says: "This was he of whom I spoke: He that comes after me is preferred before me, for he was before me" (John 1:15), - and the last in order is the highest in dignity, according to comparison. Thus, the great Forerunner is higher than the prophets, and the apostles, and all others, according to the word of the true Word Christ: he is higher than the prophets, as succeeding them, and the apostles, as preceding them.

From the Homily on the Nativity of the Holy Prophet, Forerunner and Baptist.
Become a Patreon Supporter!
John at 11:25:00 AM
Share
‹
›
Home
View web version