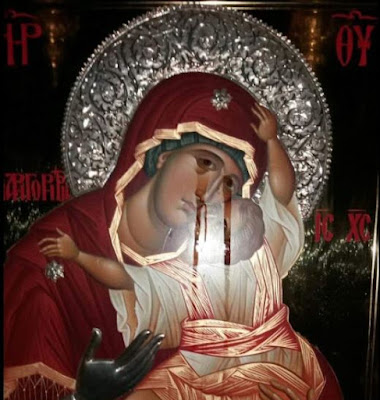 The parish priest, Archimanrite Christodoulos Katsifis, explains what has been taking place at the Church of Saint Demetrios in Nea Elvetia of Vyronas, a suburb of Athens, for nearly two years regarding the weeping and myrrhgushing icon of the Panagia.
Ceaseless Weeping 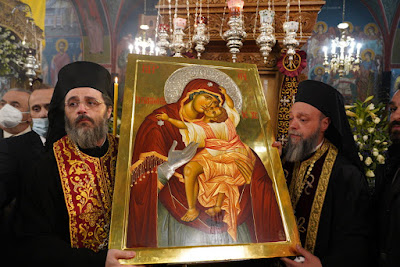 "On April 28, 2021, Holy Wednesday, during the Service of Holy Chrismation, myrrh began to flow from the shrine that held the icon and it was fragrant. From then until today, people come and collect the myrrh of the Panagia with cotton."

Fr. Christodoulos, who sees hundreds of believers every day coming to the Panagia to ask for her help, emphasizes that: "The sacred weeping and the divine myrrhgushing are a perpetual and daily wondrous sign from God."

"Believers had come a few days ago from England and Cyprus, and when the priest began to read the entreaties in front of the shrine with the icon, while it was dry, the icon suddenly began to flow with myrrh. The pilgrims, moved by the event, began to gather it up with cotton," he added.
Miracles

He then referred to miraculous events that have taken place throughout this time by the Panagia of Vyronas:

"Many miracles have been performed so far. A young man from Australia sent us a message about a miracle of the Panagia. Despite the fact that his lungs were completely destroyed from the coronivirus, he was healed. His aunt had come and venerated the icon and with tears in her eyes asked for the healing of her nephew. The sick young man then had a vision of the Panagia who told him not to worry, everything will go well." 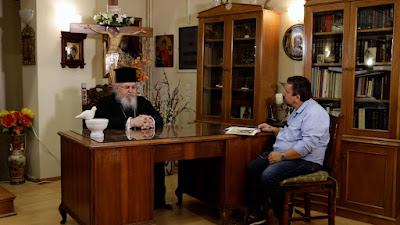 Testimony of Metropolitan Daniel of Vyronas

"The myrrhflowing and weeping of the Icon of Consolation is due to the Grace of God. God has blessed us for making this take place for two consecutive years. Wondrous is the manner in which God has manifested His Grace.

On September 8th, for the Nativity of the Theotokos, we had a Divine Liturgy in the Church of Saint Demetrios. At the time when the Deacon was saying the Gospel and speaking the words of the Panagia, tears began to flow from the Icon of the Panagia of Consolation. The sexton came to the Sanctuary and told me what was happening. I answered her how there should be no noise and let our Panagia act as she wishes. The myrrhflowing continues to this day and in fact the myrrh is so much that it reaches the floor.

Many people come to venerate the Icon of the Panagia. An acquaintance of ours, who serves in one of our Monasteries, was ill and the Panagia appeared to her, telling her 'you will be healed'. When the lady asked her: 'Who are you so I can come and venerate you?' She answered her: 'I am the Panagia of Consolation.' And so she went to the Church of Saint Demetrios to venerate her Grace.

Many miracles happen and they keep telling us about them. It is not accidental that the Panagia flows with myrrh in the Church of Saint Demetrios the Myrrhgusher. All these are mysteries in which the Grace of God acts for our consolation. Our Panagia consoled us during the period of the pandemic with her tears and myrrh. All the time the Christians were suffering from the pandemic, and they could not even go to confess and commune, the Panagia gave this testimony so that we may have patience and lead us to the solution of this temptation."

A Divine Liturgy takes place at the Church of Saint Demetrios daily at 7am. Supplicatory Canons are done daily at 11am and 7pm. The church is open daily from 7am to 8:30pm.
John at 12:20:00 PM
Share
‹
›
Home
View web version