Homily on the Nativity of John the Forerunner and Baptist of the Lord (St. Luke of Simferopol) 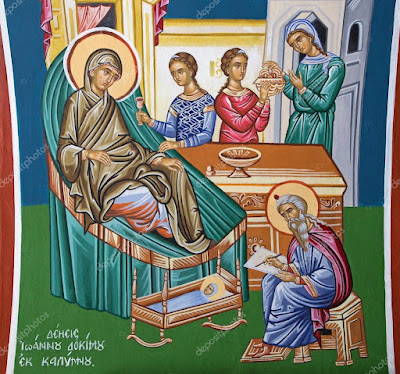 (Delivered on June 24/July 7, 1951)
Prophet and Forerunner of the coming of Christ, worthy of praise, we are perplexed, who honor you with love.

Well, how can we not be perplexed, how can we offer praise worthy of that about which the Lord Jesus Christ Himself said, that among those born of women, no one greater than John the Baptist has appeared.

How can we praise the one who is higher than all the saints after the Most Holy Theotokos?

This is the first of the saints in the kingdom of heaven.

The merits of the saints are so great that we cannot count them. What can be said about him, about the one who appeared to the world in the spirit and strength of Elijah?!

What was the spirit of Elijah the Prophet? You know that it was a fiery spirit, burning with love for God. And the power of the Prophet Elijah is also indescribable, for by the power of his prayer he stopped the rain in the land of Canaan for three and a half years, and in a contest with pagan priests about faith, he called fire from heaven on a sacrifice on which water was poured.

It was in such a spirit and in such power that John the Forerunner of the Lord came.

The Holy Prophet Isaiah says that he is the one who should be called “the voice of one crying in the wilderness: prepare the way of the Lord, make His paths straight” (Is. 40:3) .

And he completed this task. What was this task?

The great venerable Makarios of Egypt likens the nation inhabited by sinners to a dense forest, overgrown with thorny bushes, likens it to dense thickets of reeds and says that it is extremely difficult to get through in such a thicket, you need to push the branches apart with your hands, push away the thickets of reeds.

Namely, such was the nation inhabited by Jews before the coming of the Lord Jesus Christ.

It was an extremely sinful nation, which had departed from faith in the True God and gone into idolatry.

These were people who sacrificed their children to Baal and Astarte, shedding their blood.

And so the task before John the Forerunner was to prepare the way for the Lord in this dense forest. Such a task has never been entrusted to a person, and the greatest spiritual powers were needed in order to fulfill it.

Let us remember that the holy Forerunner of the Lord prepared for the fulfillment of this task, having lived for more than twenty years in the wild Judaean desert. He lived alone and away from people, with animals; he wore thorny felt clothes and slept on the rocks of the desert.

Why was it necessary? So that, in unceasing prayer to God, in the most difficult fasting, abstinence and vigil, to acquire strength similar to the power and spirit of Elijah. And the holy Forerunner of the Lord acquired such strength.

He shook the hearts of the Jews with his sermon on the banks of the Jordan. He prepared the way for the Lord with this preaching of his, with this fiery call to repentance.

His sermon was so powerful, so influencing to human hearts, that crowds of people came from all over Judea to listen to the denunciations of the Forerunner, to repent and be baptized with the baptism of repentance.

This baptism was necessary in order to prepare for the true baptism in the name of the Father and the Son and the Holy Spirit, which was established by our Lord Jesus Christ.

The Forerunner was completely fearless: he never thought about his own safety, he stood up for the truth so strictly that he was not afraid to expose even King Herod in ugly adultery and iniquities. And for this he was executed.

Didn't God Himself testify to the world about his immeasurable greatness when he sent the archangel Gabriel to announce to the priest Zechariah that this greatest of people would be born from him!

Didn't the archangel say that he would be filled with the Holy Spirit from his mother's womb?

This is why I will praise John the Baptist with my weak lips.

And I will draw your attention to another one.

When the archangel Gabriel announced to the priest Zechariah that a Forerunner would be born from him, Zechariah did not believe, although he was full of faith in God. Although he and his wife Elizabeth were righteous, nevertheless this righteous man did not believe.

And did God forgive him this wavering in faith? No, He punished him with a heavy punishment, through the mouth of the archangel he commanded him to be dumb for nine months, until the time of the fulfillment of the prophecy.

This was the punishment of the righteous for unbelief.

And if the Lord so punished the righteous for his wavering in faith, then what will happen to us sinners if our faith is not firm?

We read from the Apostle Paul in the Epistle to the Hebrews: “But without faith it is impossible to please God; for it is necessary that he who comes to God believe that He exists, and rewards those who seek Him” (Heb. 11:6).

Well, how can you believe in the One Whom you do not imagine? How can you love someone in whom you don't believe? Without faith and without love, there is no way to please God. Remember this.

What is required of us is unshakable faith, faith undisturbed by anything.

If you ever waver in faith, then do not remain in your wavering, but be careful so as not to suffer a heavy punishment for it.

The priest Zechariah, punished by God, was pardoned by Him, and not only pardoned, but received a great gift of prophecy, for you heard what he said when his son John the Baptist was born. He said:

“Blessed be the Lord, the God of Israel, that he visited his people, and created deliverance for them, and raised up a horn of salvation for us in the house of David, his servant, as he proclaimed through the mouth of his holy prophets who were from time immemorial, that he would save us from our enemies and from the hand of all those who hate us ... " (Luke 1:68-71).

Of course, yes, of course, a very clear prophecy of the coming of the Savior.

You see, the Lord does not leave without punishment those who hesitate in faith, but the Lord, having punished Zechariah, forgave, and not only forgave, but also gave the forgiven the great gift of His grace - the gift of prophecy.

Therefore, if you ever happen to waver in your faith, do not lose heart. Falls are inevitable in our Christian life.

Remember how the priest Zechariah, the father of the Forerunner, was forgiven by God, and hope that if you repent, He will raise you up in your Christian dignity and give you the gifts of His grace so that you can follow Him further.

The Lord will help.

And if you believe this, you know that the Lord will not leave you even after your fall.