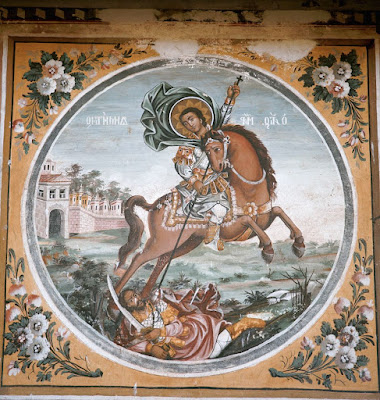 I was invited to go to Sesklo, 16 km away from Velestino for a power of attorney contract.

The house was on the edge of the village.

I go in and the hostess tells me she was going to find witnesses.

In the meantime I ask the old woman if she wants to confess and she asks me:

"My child, are you of Christ?"

"Let me tell you. I come from a village in Evia. My daughter is married here.

Every Saturday I went and swept the Church of Saint Demetrios because no woman dared to go due to there being loud noises.

I was thirteen years old.

My mother would go to the nearby river, soak the towels and put them on my forehead to cool off.

One day when my mother left for the river, a young man appeared, without opening the door, and I asked him:
'Barba, how did you get into my room?'
'Calm down,' he said saying my name, 'I am the Martyr Demetrios. If I do not take care of you who cleans my house, who will I take care of!'

He comes to the bed, picks me up and I sit on the bed.

He crosses me four times, front, back, right and left.

I immediately realized that the fever was gone.

'I'm leaving now because your mother is coming. You will grow up, get married and have three children.'

'I do not want to get married, I want to be well,' I said loudly and he disappeared in front of me.

My mother came, and I told her what happened."
Source: Translated by John Sanidopoulos.
John at 1:19:00 PM
Share
‹
›
Home
View web version