Saint Demetrios and the Bitter Woman 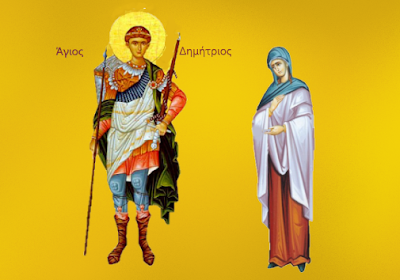 It was around the beginning of the 20th century when in Aitoliko a pious and faithful woman suddenly became a widow. Helpless and sad as she was with her young son Demetrios she tried to move on with their lives. The pain was silent but unbearable.

Her son, Demetrios, however, soon fell ill and flew off to heaven. The blow to the mother was heavy. In such a short time she lost her husband and child.

The second may have been heavier and she could not overcome it. It was God's fault!

She had placed her last hopes and supplications in Him but what she asked of Him did not come true.

But God knows what was more good and beneficial for the soul of young Demetrios. Humans see the present alone, without thinking that we ourselves are unable to see why many things happen that God allows.

In the Church of Saint Demetrios in Aitoliko, which was then a parish, they wanted to renovate and expand it. The commissioners started a fundraiser and it was time to pass by the house of the once faithful and reverent woman who was severely tested in this life.

They knocked on her door, she opened it and the commissioners explained the reason for their presence there. As soon as she heard them, she became angry and did not even allow them to enter her house. She shouted at them like a bereaved mother who had asked Saint Demetrios to take care of her sick child but he did not listen to her. "There is no God, get out of here. There is no Saint Demetrios. Where was he, where were they?" she shouted at them.

Indeed, without reacting, the commissioners left respectful and aware of the pain of this woman. The door behind them slammed shut.

Within minutes, there is a knock at the door again.

The woman turned with a rush and a little indignation, believing that they were the commissioners again in order to chase them away. She opens it and sees a young, handsome, tall man in military uniform, but not of the time but like the ones depicted on the saints in the churches.

She did not have time to think about it and to compare it or to question it, and just before this woman managed to react, the young soldier entered her home and sat in her humble living room.

As the soldier sat down, he lifted his leg coverings and showed her his knees. "Do you see these here? (showing her his knees, which were injured and from which he was bleeding) I, my good woman, listened to you and begged God to make Demetrios well, but God did not want to. He must know something more than me and you."

She was immediately startled while the young soldier got up and left without saying anything else.

As soon as he left, the house smelled of myrrh. It was flooded with fragrance.

Yes it was Saint Demetrios!

Immediately after, the woman returned to her deep faith, all doubts left her, all questions were erased and she continued her daily life in the living church.

In fact, she was the main donor of the renovation of the church since a small field opposite the island of Aitoliko she had sold so that she could also offer her widows mite (cf. Mark 12:41-44. What does the Gospel itself say about those who give from their deficit and not from their surplus? We may realize the difference between the sacrificial offering and the donation) for the Saint who protected and supplicated for her and her son.

She did not fail in her whole life to mention this divine concession that saved her soul and through it to comfort everyone who had become bitter like she was.